Supreme Court nominee Brett Kavanaugh firmly and at times tearfully denied the late-breaking allegations of sexual misconduct against him in testimony Thursday before the Senate Judiciary Committee.

“This confirmation process has become a national disgrace,” Kavanaugh said in opening remarks. “You have replaced advice and consent with search and destroy.”

“You may defeat me in the final vote,” he said, “but you’ll never get me to quit.”

Kavanaugh’s chief accuser, Christine Blasey Ford, 51, testified earlier in the day. The California research psychologist and college professor was questioned about her allegation that Kavanaugh, 53, sexually assaulted her while drunk when both were teens in high school.

“I’m never going to get my reputation back,” Kavanaugh told the Senate committee. “My life is totally and permanently altered.”

Kavanaugh faced criticism for lacking emotion days ago in a Fox News Channel interview, but the federal appeals judge did not lack anger, frustration, or other emotions in confronting the allegations Thursday afternoon. 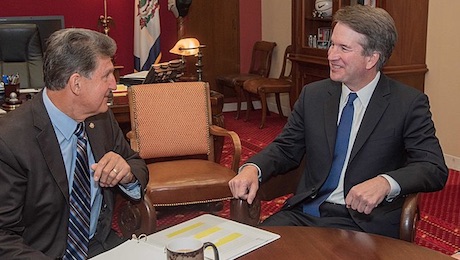 A vote by the Judiciary Committee’s 11 Republicans and 10 Democrats on sending the nomination to the full Senate was expected Friday.

Here are nine key moments in the extraordinary hearing examining the character of President Donald Trump’s nominee to the high court.

Kavanaugh said during his testimony that Ford’s allegation “is not only uncorroborated, it has been refuted.”

“I denied the allegation immediately, categorically, and unequivocally,” he said. “All four people allegedly at the event, including Dr. Ford’s longtime friend Ms. [Leland] Keyser, have said they recall no such event.”

Besides Kavanaugh, Ford said, his classmate Mark Judge was in the room when Kavanaugh attacked her. She said Leland Ingham Keyser and Patrick J. Smyth were the others at the gathering of teens.

However, under penalty of felony, everyone named by Ford said in sworn statements to the committee they did not remember the gathering. Keyser said she didn’t remember knowing Kavanaugh.

Kavanaugh said he doesn’t doubt Ford might have experienced a sexual assault, but stated firmly and repeatedly that it was not by him.

“I was not at the party described by Dr. Ford,” Kavanaugh testified.

At the end of his prepared remarks, Kavanaugh said:

I ask you to judge me by the standard that you would want applied to your father, your brother, or your son. My family and I intend no ill will toward Dr. Ford or her family. But I swear today, under oath, before the Senate and the nation and before my family and God, I am innocent of this charge.

In his opening remarks, Kavanaugh directed anger at some committee Democrats and their political backers:

This whole two-week effort has been a calculated and orchestrated political hit fueled with apparent pent-up anger about President Trump and the 2016 election, fear that has been unfairly stoked about my judicial record, revenge on behalf of the Clintons, and millions of dollars in money from outside, left-wing opposition groups.

He lashed out at an allegation that emerged Wednesday from a woman, Julie Swetnick, who claimed he participated in multiple gang rapes as a high school student.

“The Swetnick thing is a joke,” Kavanaugh said. “That is a farce.”

Kavanaugh said it will become difficult to nominate good people to serve the country because they will fear a similar smear.

He warned, “What goes around comes around,” and added: “I fear for our future.”

Early on, Kavanaugh became emotional when talking about his younger daughter, Liza, and his wife Ashley.

“I intend no ill will to Dr. Ford and her family,” Kavanaugh said, fighting tears. “The other night, Ashley and Liza said their prayers and little Liza—all of 10 years old—said to Ashley, ‘We should pray for the woman.’”

Kavanaugh admitted to drinking beer, and, in his youth, perhaps too much.

“I liked beer. I still like beer, but I did not drink beer to the point of blacking out, and I never sexually assaulted anyone,” Kavanaugh said.

He admitted to “going to sleep” after drinking while young, but said he wouldn’t forget what had happened.

4. ‘Opposition-Researched From Head to Toe’

Kavanaugh said he has been in the public arena under extreme public scrutiny for decades, and nothing like this has come up before.

He worked for President George W. Bush in the White House counsel’s office before Bush named him in 2003 to the U.S. Circuit Court of Appeals for the District of Columbia. Democrats delayed his confirmation until 2006.

As a young man, Kavanaugh worked for the solicitor general’s office under President George H.W. Bush. He also was a law clerk for Supreme Court Justice Anthony Kennedy, whom he would succeed if confirmed by the Senate.

Kavanaugh talked about his time working for independent counsel Ken Starr during the investigation of President Bill Clinton during the 1990s.

That investigation eventually led to a House impeachment against Clinton for perjury and obstruction of justice regarding the Monica Lewinsky scandal. The Senate acquitted Clinton after a trial.

That office was the subject of enormous scrutiny from the media and the public. During 1998, the year of impeachment for President Clinton, our office generally and me personally were in the middle of a national media and political spotlight. I and other leading members of Ken Starr’s office were opposition-researched from head to toe, from birth through present day. Recall people who were exposed that year, 1998, as having engaged in some sexual wrongdoing or indiscretions in the past.

“One person on the left even paid $1 million for people to report some sexual wrongdoing,” he said. “It worked. It exposed some prominent people. Nothing about me.”

Sen. Sheldon Whitehouse, D-R.I., asked Kavanaugh about phrases used in the Georgetown Prep yearbook, one being the word “boofed.”

This was something, he said, that high school kids thought was funny.

Whitehouse also asked about the term “Devil’s Triangle.” Kavanaugh said this was the name of a drinking game.

Whitehouse asked why the letter “F” appeared seven times in reference to someone in the yearbook. Specifically, this was a reference to the entry “FFFFFFFourth of July.”

“One of our friends, Squee, when he said the F-word starting at a young age, [he] had kind of a wind-up to the F-word,” Kavanagh said. “And when we were 15, we thought that was funny.”

Also in response to Whitehouse, the judge explained that “Beach Week Ralph Club” referred to vomiting.

Sen. Lindsey Graham, R-S.C., spoke indignantly about the deterioration of the process and how committee Democrats surfaced the charge from Ford only after Kavanaugh’s three days of testimony at confirmation hearings earlier this month. Sen. Dianne Feinstein, D-Calif., had known about the accusation for six weeks.

“This is the most unethical sham since I’ve been in politics, and if you really wanted to know the truth, you sure as hell wouldn’t have done what you’ve done to this guy,” Graham angrily told committee Democrats.

“Would you say you’ve been through hell?” the South Carolina Republican, also a former prosecutor and defense attorney, asked Kavanaugh.

Kavanaugh responded: “I’ve been through hell and then some.”

“I cannot imagine what you and your family have gone through,” Graham said, then told Democrat colleagues:

Boy, you all want power. God, I hope you never get it. I hope the American people can see through this sham. That you knew about it [Ford’s charge in a July 30 letter] and you held it. You had no intention of protecting Dr. Ford. None.

She’s as much of a victim as you are. God, I hate to say it because these [Democrats] have been my friends.

“But let me tell you,” Graham said, turning to Kavanaugh, “when it comes to this, if you’re looking for a fair process, you came to the wrong town at the wrong time, my friend.”

“To my Republican colleagues, if you vote ‘no’ [on Kavanaugh], you’re legitimizing the most despicable thing that I have seen in my time in politics,” he said.

The committee’s ranking member, Sen. Dianne Feinstein, D-Calif., was the first of many Democrats to push Kavanaugh on why he didn’t ask for an FBI probe of Ford’s allegation.

“If you’re very confident of your position, and you appear to be, why aren’t you also asking the FBI to investigate these claims?” she asked.

Kavanaugh responded: “Senator, I’ll do whatever the committee wants. I wanted a hearing the day after the allegation came up.”

At another point, while noting that the committee was investigating, Kavanaugh said he was open to an investigation by the FBI.

Sen. Richard Durbin, D-Ill., tried to tell Kavanaugh what to do in a reference to White House counsel Don McGahn.

“I’ve got a suggestion for you. Right now, turn to your left in the front row to Don McGahn,” Durbin said. “Ask him to suspend this hearing and nomination process until the FBI completes its investigation of the charges made by Dr. Ford and others.”

Judiciary Chairman Charles Grassley, R-Iowa, sternly told Durbin that the committee will decide what to do next.

At a later point, asked about an FBI investigation, Kavanaugh snapped at Sen. Chris Coons, D-Del.: “It’s been investigated, and all four witnesses say it didn’t happen. And they’ve said it under penalty of felony.”

The vote of Sen. Jeff Flake, R-Ariz., has been a major question as the Judiciary Committee nears a decision.

Flake, who is leaving the Senate in January and has been a critic of Trump, did nothing to signal his intentions as the unusual hearing came to a close.

“We are 21 very imperfect senators trying to do our best,” Flake said. “In the end, there is likely to be as much doubt as certainty.”

After rehearsing some of the events that led to the day, he said: “This is not a good process, but it’s all we’ve got.”

“Do you believe in God?” he asked Kavanaugh, who has talked about his Catholic faith in this setting and others.

Kennedy:  “I want you to look me in the eye. Are Dr. Ford’s allegations true?”

What about Deborah Ramirez’s allegation that he exposed himself at a Yale party, Kennedy asked.

Kavanaugh: “If that had happened, that would’ve been the talk of campus.”

Kennedy: “None of these allegations are true? No doubt in your mind?”

“Do you swear to God?” Kennedy asked, in the day’s final question.

“I swear to God,” Kavanaugh replied.

Images courtesy of U.S. Court of Appeals for the District of Columbia Circuit and Office of Senator Joe Manchin