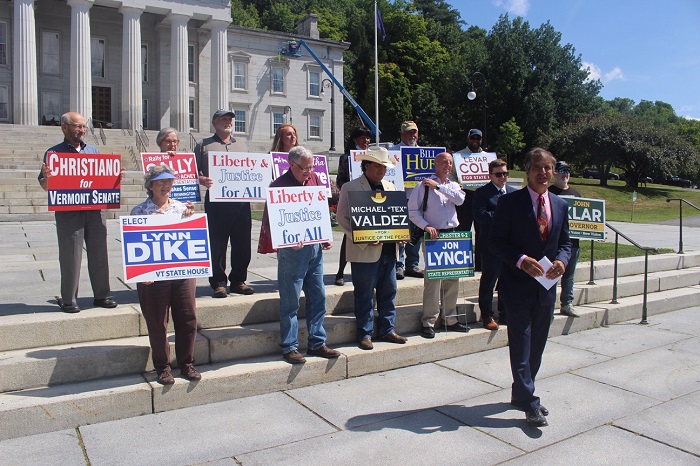 MEDIA BLACKOUT?:John Klar on Thursday introduced a mix of new and old candidates associated with his “Agripublican” platform.

MONTPELIER — Eight new candidates for office were announced from the steps of the Vermont State House on Thursday morning. The group was presented by Republican gubernatorial candidate John Klar.

Except for one independent, the new candidates are all Republicans. They are part of a larger contingent of liberty and free-market-minded candidates associated with Klar’s own campaign.

Klar, a farmer and attorney from Brookfield, seized the moment to criticize local media for failing to show up for the event.

“They don’t want us to have free speech and they don’t want our voices out — why is that?” Klar said. “I think we need to bring back the fairness doctrine for all media. If anybody is not familiar with that, research it. You have to be fair to both sides for all media.”

Among the topics addressed by the candidates was social media censorship of conservatives. One of the new candidates, Jon Lynch of Colchester, who is running for House in the Chittenden District 9-2, spoke out against social media giants.

“While Facebook, Google, Amazon and Twitter are making their millions off of essentially a public infrastructure which was developed by DARPA in the 1960s, they should be regulated like a utility and there shouldn’t be any censorship allowed at all,” he said.

Other candidates spoke against universal vote by mail elections, as established for the 2020 general election by Vermont Secretary of State Jim Condos.

“I received three additional requests for ballots at my house and they were all daughters and sons that no longer live there,” he said. Lyddy’s concerns echo other absentee ballot mishaps reported ahed of Tuesday’s primary election.

Lyddy also expressed his concerns with not having lawmakers physically available at the Statehouse. State lawmakers have not met in public since Gov. Phil Scott announced a state of emergency in March.

Another new candidate, Michael Hall, the former police chief of Manchester, is running for a Senate seat in Bennington County. He told TNR he is not surprised by the lack of media coverage.

“I hate to say it, but I don’t think that they cover things that they are not supportive of, unless there’s something there that they can use to their advantage,” he said.

On the issue of the governor’s shutdown response to the coronavirus, Hall said it’s about time to open things back up.

“I think over the past few months what we’ve seen is a number of erroneous positive findings,” he said. “Initially we were getting death counts every day and the media was putting people into a state of hysteria, and I think the infection rate versus the death count doesn’t seem [now] to be what it was.”

Initially, the death rate for COVID-19 was reported as 3.4 percent, as predicted by the World Health Organization. The Centers for Disease Control and Prevention now estimates the death rate as 0.26 percent.

Klar, commenting on the new “Black Lives Matter” mural painted on State Street visible to all from the steps of the State House, said some have used race for political purposes.

“If they can’t find Confederate flags then they go after people with white skin color because it’s working for them,” Klar said. “And we’re here to say it’s not working for you anymore. We won’t stand that anymore — that stupidity, that toxicity, that lack of civility by those who say they are tolerant and civil. It’s the opposite.”

On Montpelier City Council’s recent decision to disallow having “Liberty and Justice for All” painted next to the “Black Lives Matter” street mural, Klar said the councilors were guilty of viewpoint discrimination.

“It will get to the U.S. Supreme Court,” he said. “Vermont has one of the best cases for the Supreme Court of the United States because they were so outspokenly nasty, they so violated my and all of your rights on the record as a gift to our state.”