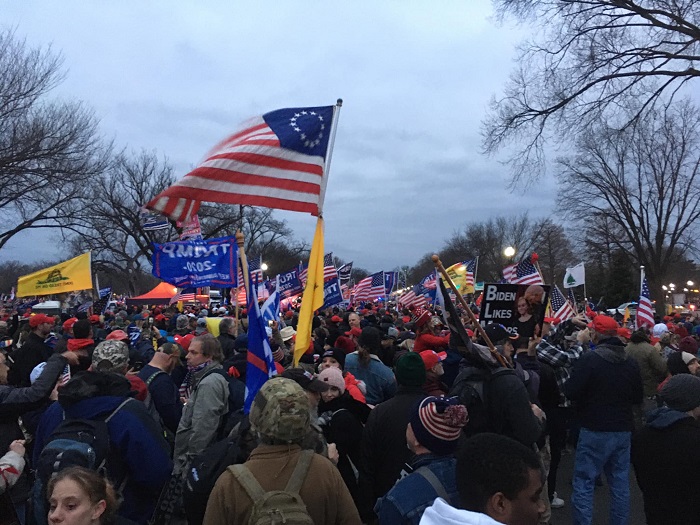 WASHINGTON — A group of Vermonters on Wednesday witnessed the historic “Save America” rally and subsequent storming of the U.S. Capitol, as a rogue mob breached building security and forced Congress to shut down temporarily, delaying election certification until late in the evening.

The group, led by Ron Lawrence, chair of the Essex Republicans, and Ellie Martin of Underhill, took a bus from South Burlington to the nation’s capital Tuesday, Jan. 5. Upon arrival Wednesday, they joined hundreds of thousands of Trump supporters who heard the president speak at The Elipse, the park south of the White House, before heading over to the Capitol Building.

“As far as you could see it was just people down every street,” he said. “The chanting was so loud.”

When the president took the stage around noon, he refused to concede the election to Joe Biden and began discussing large batches of illegal and potentially fraudulent ballots in the states of Pennsylvania, Wisconsin, Georgia and other states.

The president seemingly referenced a Jan. 4 letter to Congress from Pennsylvania Senate President Pro Tem Jake Corman, on behalf of the entire state Senate, urging a delay in certification due to “numerous unlawful violations” by the Pennsylvania governor, secretary of state, and state Supreme Court.

“We ask that you delay certification of the Electoral College to allow due process as we pursue election integrity in our Commonwealth,” that letter read.

“[In Pennsylvania] you had 205,000 more votes than you had voters,” Trump said. “ … This is a mathematical impossibility, unless you say it’s a total fraud.” He added that over 8,000 ballots in Pennsylvania were cast by people whose names and dates of birth match Pennsylvanians who died prior to 2020.

His litany of concerns with the election in Pennsylvania included more than 14,000 votes cast by out-of-state voters, more than 10,000 votes counted though received after Election Day, 60,000 mail-in votes marked as received back prior to the date on which they were mailed to voters, and 25,000 ballots “requested by nursing home residents in a single giant batch, indicating an enormous illegal ballot harvesting operation.”

As seen in the video, the president went on to cite deeply troubling issues in Georgia, Wisconsin and other states.

Following the speech, crowds began making their way to the Capitol Building, where, according to Bellows, some Trump supporters had been hit with tear gas and rubber bullets by armored police.

“The police after about an hour finally retreated up the stairs, the Capitol front stairs were breached, and everybody started running up the stairs and took over the whole front of the building,” Bellows told TNR.

“If you went around the other side of the Capitol Building that is not facing the monument, there were probably 50,000 people out there all over the building. And when we got up to the side where the monument was, there was a huge group of people pounding and breaking down the door, climbing up the sides of the walls. Some people were trying to break glass, and other people were telling them not to.”

Bellows said he heard different theories of what was behind the group of rioters, including the possibility that Antifa activists or Proud Boys members incited the violence.

“It’s really hard to tell right now because everything happed so fast,” he said.

Capitol Police on Thursday faced severe criticism for failure to manage the crowds and secure the building. U.S. House Speaker Nancy Pelosi called on the Capitol Police chief to resign over the breakdown in law enforcement.

“They couldn’t have stopped us from whatever we wanted to do,” Bellows said. “I think they realized that the people have the power.”

CORRECTION: The number of Vermonters who made the bus trip was 51. The original headline incorrectly reported that 55 passengers rode the bus together.