With affordable housing properties in Vermont being developed for around $500 per square foot at taxpayer expense, the word “affordable” seems to have lost all meaning.

“Section 8 housing” is a term often heard but rarely defined. It refers to Section 8 of the Housing Act of 1937, an oft-amended portion of federal law which authorizes the payment of rental housing assistance to private landlords.

As of 2008, approximately 4.8 million low-income households were taking advantage of Section 8 largesse funded by taxpayers. According to the U.S. Center on Budget and Policy Priorities, low-income families receiving rental assistance contribute roughly 30 percent of their income for housing (rent plus basic utilities). Moreover, rental assistance makes up the difference between this contribution and the family’s actual costs, within reasonable limits set by the federal government. 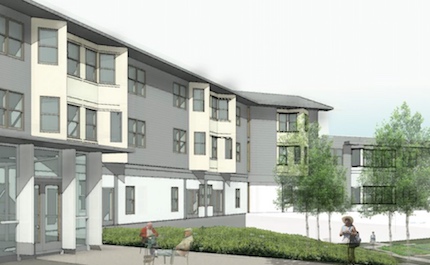 What price affordable housing in Vermont? Pictured here is Red Clover Commons in Brattleboro, a property of Brattleboro Housing Partnerships.

For Dart Everett, a veteran Brattleboro-based real estate appraiser and landlord, and owner of Everett Real Estate Service, Section 8 housing in Vermont is riddled with excessive spending, as well as internal and external abuse. In Brattleboro at least 20 percent of rentals are targeted to Section 8 tenants.

While Everett lauds the organization’s mission and compassion, he questions the money Vermont gives to such groups at steep cost to the taxpayer.

“I can tell you about the Windham & Windsor Housing Trust,” Everett told TNR. “They spend more than any private developer could ever spend.”

As an example, he points to the group’s recent spend of $4.1 million to purchase and rehab Lamplighter Inn Motel on Route 5 in North Brattleboro. The effort will result in 21 rental units, each roughly about 400 square feet in size.

“The Trust is spending $500 per square feet, with each unit about the size of a living room — something between 350 and 400 square feet — costing $200,000 apiece,” he said. “I doubt there’s any other building in Brattleboro that costs $500 a square foot. In fact, I’d be hard pressed to think there’s one elsewhere in Vermont. This is getting into the low end of Manhattan prices.”

By comparison, the typical house in Brattleboro ranges from $150 to $200 per square foot, Everett said.

Everett describes a litany of expenses that go into taxpayer-supported affordable housing — a 10 percent cut to architects and engineers, 15 to 20 percent of funding to property managers, and more. He added that many projects have luxury styles and features, and cites two low-income housing buildings on Green Street — one with five rental units and the other one with four — that have slate roofs, with copper flashing, which are installed along with granite curbing and paved parking lots.

“They don’t spare any expense,” he said.

Affordable housing in Vermont gets funding through the Vermont Housing and Conservation Board, a quasi-state entity that provides money for land conservation and housing projects. Everett says the system is unfair to private owners.

“Many of these Section 8 units are redone when the tax credits expire, but it seems to me to be excessive spending,” he said. “They get the funding through the Vermont Housing & Conservation Board — its director, Gus Seelig, has resisted efforts to allow private owners to apply for the funding.”

Both Republicans and Democrats have blocked efforts to allow more private involvement in the state-centralized world of affordable housing, while at the same time appropriating millions. Former Gov. Howard Dean bonded $30 million, and legislature this past year appropriated $10 million.

“I saw Gov. Phil Scott this year and I told him, ‘So this is affordable housing, at $500 a square foot?’ He winced. He knows, he was in the construction business.

“They’re building things you and I couldn’t afford to build for ourselves and are calling it ‘affordable.’ It’s not affordable … because they charge market rents but then get Section 8 for most of the units. This has been going on for 30 years.”

Across the state from Windsor and Windham counties, in New Haven, former Vermont State Housing Authority Section 8 field representative Douglas Tolles quit the affordable housing business after witnessing internal abuse, the coddling of bad tenants and even personal threats to his life. Tolles inspected affordable housing units in Addison and Chittenden counties for the state.

“The construction cost per square foot in Vermont’s affordable housing sector is way, way out of whack,” Tolles told TNR.

He points to a building in the center of downtown Middlebury along Route 7 that was razed three years ago for new affordable housing.

However, he said Addison County’s shire town has some newer affordable units to be proud of, especially the Middlebury South Village building between Court Street and Creek Road.

Tolles noted that so-called Section 8 recipients can shop around the state looking for housing they like, but sometimes the idea of affordability becomes meaningless to outsiders, especially taxpayers.

“The state then makes the rent payment to the landlord directly. The tenant is expected to contribute something, that is, 30 percent of their income,” he said. “But some of the tenants reported income as being zero. What’s 30 percent of zero? In many cases, I saw they paid nothing or very little.

“The stated goal behind housing support is to give people a chance to find affordable housing, reconstruct their lives, advance skills and find a job. But it only happened twice in the 15 months I worked for VSHA. Most of the tenants refused to work, were multigenerational low income, and they just chose to let others pay their way.”

Christine Hart, executive director of Brattleboro Housing Partnerships, is proud of her organization’s contribution to making Brattleboro a good place to live, regardless of income level.

Christine Hart: “To be fair, you have to look at the scope of the work being done. Taking an old, historic building and reusing it is going to expensive. But then we’re preserving an historic property and making it affordable for low-income people.”

Hart said that the Brattleboro Housing Authority was created in 1962 by the town of Brattleboro to address the housing needs of the community’s lowest income elderly persons. The organization’s first affordable project, called Melrose Terrace in West Brattleboro, opened in 1966 with 19 buildings, including 80 living units. However, some of the Melrose buildings are scheduled for demolition. It currently is focused on the affordable Red Clover Commons Phase II project.

Hart told TNR that to be fair to professionals in the affordable housing sector, any critical charges of high-construction costs should be looked at on a case-by-case basis.

“In Windsor, for example, they retook the old Armory Square from 74 units to 50 units. This made the cost per square foot very high, but then the project was a substantial renovation in the community,” she said.

According to Vermont Natural Resources Council, the old Armory Square building in Windsor was built in 1922 for employee housing. The apartments were later subdivided into 72 units and subsidized in 1989. Twenty-five to 30 units continue to be subsidized under federal Section 8 regulations.

Hart believes projects like the Old Armory are worth both undertaking and paying for.

“So, to be fair,” she continued, “you have to look at the scope of the work being done. Taking an old, historic building and reusing it is going to expensive. But then we’re preserving an historic property and making it affordable for low-income people. I think when it comes to questioning high construction costs in affordable housing, you have to first compare apples to apples.”

7 thoughts on “Is $500 per square foot in Vermont really ‘affordable’ housing?”