President Donald Trump and Deputy Attorney General Rod Rosenstein are set to meet Thursday in what likely will be an unpleasant encounter for both.

The scheduled meeting follows a report Friday in The New York Times that Rosenstein talked to Justice Department and FBI officials about secretly recording Trump, then using the information to encourage Cabinet members to use the 25th Amendment to remove Trump from office.

Rosenstein reportedly verbally offered his resignation on Monday at the White House to chief of staff John Kelly, but later had a phone conversation with Trump, who is attending the United Nations General Assembly in New York.

Rosenstein appointed Robert Mueller as special counsel investigating Russian interference in the 2016 presidential election, and any cooperation with the Trump campaign. Rosenstein oversees that probe after Attorney General Jeff Sessions recused himself from the matter because of his advisory role in the campaign.

Here are five key questions going into the Trump-Rosenstein meeting.

For his part, Rosenstein denied the Times story.

“I never pursued or authorized recording the president and any suggestion that I have ever advocated for the removal of the president is absolutely false,” he said in a written statement Friday.

For the deputy attorney general to deny pursuing or authorizing the secret recording of Trump is not the same as denying he talked about it, as the Times reported. 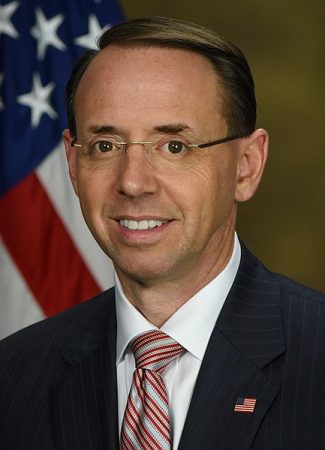 The Associated Press reported that sources said Rosenstein, the No. 2 official at the Justice Department, was joking during a meeting with other officials.

“The president will bring the deputy attorney general in on Thursday and figure out what he said and figure out whether he believes him or not,” Tom Fitton, president of the conservative watchdog group Judicial Watch, told The Daily Signal.

The Times story mentioned several meetings, but specifically one on May 16, 2017, in which Rosenstein talked about recording the president and the 25th Amendment.

“The reports that he called for secretly recording the president and using the 25th Amendment are not the kind of thing to even joke about,” John Malcolm, director of the Meese Center for Legal & Judicial Studies at The Heritage Foundation, told The Daily Signal.

These meetings came after Trump fired James Comey as FBI director. Rosenstein had drafted a memo to Trump outlining reasons to fire Comey.

Andrew McCabe, then the FBI’s acting director, was among the officials in the meeting with Rosenstein, according to the Times.

The very next day, May 17, 2017, Rosenstein named Mueller, a former FBI director himself, as special counsel to investigate Russian interference and possible collusion with the Trump campaign.

“He was in a meeting with the FBI. They didn’t wiretap the president that we know of,” Fitton said of Rosenstein. “They didn’t invoke the 25th Amendment, but after the meeting he did proceed to name a special counsel.”

The Times reported that one source said Rosenstein was being sarcastic; another disagreed with the characterization. The story reads:

But according to the others who described his comments, Mr. Rosenstein not only confirmed that he was serious about the idea but also followed up by suggesting that other FBI officials who were interviewing to be the bureau’s director could also secretly record Mr. Trump.

Based on what he knows about Rosenstein, Ron Hosko, a former assistant FBI director, said an attempted coup using the 25th Amendment doesn’t seem likely.

“It’s believable if you’re talking about, joking about, frankly, how crazy this presidency has been, with elements of madness in his tweets and comments that are worrisome,” Hosko told The Daily Signal.

“I’m not sure he’s going. If Rosenstein stays, then Trump has political leverage,” Powell, author of the book “Licensed to Lie: Exposing Corruption in the Department of Justice,” told The Daily Signal.

“But he’ll have to leave within six months,” Powell said. “He’s a witness to so many conversations and the cause of the Comey firing. With the FISA warrant [to surveil Trump campaign volunteer Carter Page], Rosenstein told Congress he never read it. He’s in the middle of a huge mess.”

One element of Mueller’s probe is whether Trump’s intent in firing Comey would constitute obstruction of justice. Because Rosenstein wrote the memo suggesting Trump fire Comey, however, he gave the president political cover to take the action.

“He was arguably a witness in the case,” Malcolm said. “But that doesn’t seem to have a disruptive effect on his ability to supervise the investigation.”

Only those in the May 2017 meeting know what was said, but the story is believable based on Rosenstein’s actions, said Cleta Mitchell, a Washington lawyer with 40 years of experience in law regarding elections, lobbying, and public policy.

“Rod Rosenstein has been at the center of a terrible, ongoing, destabilizing process,” Mitchell told The Daily Signal, referring to the Mueller probe. “Rod Rosenstein should look at himself in the mirror and ask himself why people would believe this about him. He has lost every shred of integrity and credibility.”

2. Who Would Replace Rosenstein?

If Rosenstein is fired or resigns, his replacement as acting deputy attorney general reportedly would be Solicitor General Noel Francisco, currently the next Senate-confirmed Justice Department official in line for the spot.

Typically, a vacancy in the deputy slot would be filled by the associate attorney general. That position isn’t held by a Senate-confirmed nominee, however, but rather acting Associate Attorney General Jesse Panuccio.

Francisco also successfully argued before the Supreme Court against the constitutionality of President Barack Obama’s recess appointment to the National Labor Relations Board at a time when the Senate actually wasn’t in recess. The high court ruled 9-0 against the Obama administration.

Francisco also gained a 4-4 tie at the high court after arguing for the Little Sisters of the Poor, a Catholic order of nuns, against the Obamacare mandate requiring employers to cover contraception and abortion-inducing drugs in employee health plans.

3. What’s the Future of the Mueller Probe?

The Times story could give Trump what he is looking for in ending the Russia probe, said Hosko, the former assistant FBI director.

“This revelation provides President Trump with the opportunity to fire Rosenstein if he’s so inclined,” Hosko said, adding:

But it could carry a huge political risk that many people will see this as the beginning of the Saturday night massacre. The end goal is to stop the Russia investigation. He has been incredibly critical of Jeff Sessions. He could put in someone to oversee the investigation and set a deadline to close it. …

If Mueller comes back with no indictments, the president can pat himself on the back and point out that the people running this investigation weren’t on my side.

Legal experts say they doubt that replacing Rosenstein would mean an end to the Mueller probe.

Mitchell, however, said Rosenstein did not follow proper Justice Department protocols in naming a special counsel.

Mitchell said a new Justice Department official should ask Mueller to assess what evidence he has linking Trump with Russia. Then, she said, the investigation should be moved to the Justice Department’s line prosecutors.

4. What About Sessions’ Future?

Trump has been fuming at his attorney general, Sessions, for months because he recused himself from the Russia probe.

“All the calculus has been the president believes his attorney general should play ball, a lawyer who will serve him rather than serve the country,” Hosko said. “If he thinks Francisco will do what he wants, that could open the door to fire Sessions.”

But that could be problematic on two fronts, Hosko said. One, Francisco might surprise Trump as Sessions did, and two, he wouldn’t likely get confirmed by the Senate if Sessions were fired.

“I don’t know how long someone could work in a permanent acting position,” he said. “You would want a stable team in place at the Justice Department.”

Powell, the former federal prosecutor from Texas, anticipates Sessions could be gone.

“It’s common knowledge that the president hasn’t appreciated Sessions’ approach on a number of fronts,” Powell said. “I wouldn’t be surprised if Sessions leaves one way or another after the midterms.”

5. What Will Democrats Do?

Democrats already have claimed that Trump’s firing of Comey was obstruction of justice, and warned that firing Mueller or Rosenstein could be considered the same.

“If President Trump forces out Mr. Rosenstein—regardless of how it happens—the American people deserve a full and complete accounting of these actions,” Cummings said, “and the oversight committee should hold an immediate emergency hearing with Mr. Rosenstein, obtain all the emails and other correspondence from the White House and Justice Department, and start conducting transcribed interviews and depositions about this decision.”

Mr. Rosenstein’s removal would plunge our nation into uncharted territory and pose a serious and profound threat to the continued work of the special counsel, and I would expect the American people to be outraged if President Trump’s extended campaign to interfere with this investigation results in Mr. Rosenstein’s ouster.