By Elizabeth Slattery | The Daily Signal

The Supreme Court heard oral argument Monday in the first major case involving gun rights in nearly a decade. A local shooting club is challenging New York City’s handgun regulations, perhaps the most restrictive and draconian in the nation.

New York’s regulations banned residents from taking their lawfully owned and registered handguns anywhere outside their homes except to one of seven gun ranges within city limits. The city prohibited residents from transporting their handguns to ranges outside the city or to any other location, including a resident’s second home.

The Supreme Court agreed to hear this case in January and added it to the 2019-2020 calendar that began in October. In the intervening months, the city revised its regulations, allowing gun owners to transport their handguns to ranges outside the city as well as to second homes. 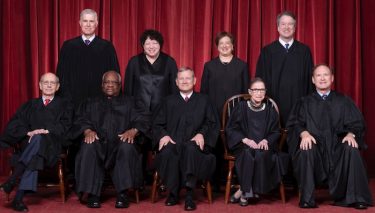 Based on their questions (which do not always reflect how a justice ultimately will vote), Gorsuch and Alito think the court should reach the merits, while Ginsburg, Sotomayor, and Breyer think the case is moot.

This course change came after six years in which the city defended its prior regime as constitutional. The city then suggested the justices dismiss the case as “moot,” but the Supreme Court proceeded with oral argument.

It was a packed house as gun control advocates protested on the plaza outside the court. Inside, former U.S. Solicitor General Paul Clement argued on behalf of the shooting club and shared time with Jeffrey Wall, the second-highest lawyer in the Solicitor General’s Office. Richard Dearing, a lawyer with New York City’s legal department, defended the regulations.

1. Is This a Live Case or Controversy?

The Constitution limits judicial review to live “cases” or “controversies,” which means judges may not issue “advisory opinions” on hypothetical matters. In order for a case or controversy to be “live,” a court must be able to grant some relief to the complaining party.

Justices Ruth Bader Ginsburg and Sonia Sotomayor seized on this immediately. New York argues that it has given the shooting club members everything they want, leading Ginsburg to ask: “What’s left of this case?”

Sotomayor asserted, “You are asking us to take a case where the other side has thrown in the towel.”

But as Roberts wrote in a 2007 opinion, under the doctrine of voluntary cessation a defendant does not “moot” a case by willingly stopping the action that gave rise to litigation unless it is “absolutely clear that the allegedly wrongful behavior could not reasonably be expected to recur.”

Otherwise, the government could change its laws or regulations at the 11th hour and prevent the Supreme Court from ruling. Justice Neil Gorsuch called the city to task, saying it took “herculean, late-breaking efforts to moot” the case.

On behalf of the shooting club members, Clement explained that they seek a declaration that the transportation ban is and was unconstitutional, to prevent the city from reversing course in the future.

Clement pointed out that the new regulations (which require “continuous and uninterrupted transport”) also pose issues—would members violate the new regulations if they stopped at a coffee shop or rest stop on the way to a shooting range outside the city? For this reason, he argued, the case is not moot.

2. What Happens If the Case Is Moot?

If a majority of justices is persuaded that the case is moot, several other Second Amendment cases are waiting in the wings. The justices could agree to take up another case and hear oral argument in the spring.

A quick search of the Supreme Court’s docket, for example, turned up Worman v. Healey, challenging Massachusetts’ ban on firearms and magazines that are commonly used in more than 40 states; Mance v. Barr, challenging the federal law criminalizing interstate handgun sales; and Rogers v. Grewal and Gould v. Morgan, challenging Massachusetts’ and New Jersey’s requirements that concealed-carry permit applicants show a “good reason” or “justifiable need” (aside from self-defense) for carrying a handgun outside the home.

Undoubtedly, scores of other cases are winding through the district and appeals courts across the country.

Ginsburg balked at the city’s suggestion that under the prior regulations, residents with a second home should simply buy a second gun and leave it unattended.

“What public safety or any other reasonable end is served by [having one gun] in a place that is often unoccupied and … more vulnerable to theft?” she asked.

On behalf of the city, Dearing struggled to find an answer, noting that historically there have been “incidental burdens” similar to this.

Justice Stephen Breyer asked whether the change in regulation had affected public safety (the city’s rationale for its original regime). Dearing answered that the police commissioner determined that the ban on transporting handguns “could be repealed without a negative impact on public safety.”

Justice Samuel Alito followed up: “So you think the Second Amendment permits the imposition of a restriction that has no public safety benefit?”

Dearing again appealed to history, saying that the focus should be on “how the restriction accords with history under the Second Amendment.”

This led to a discussion of the heart of the case—whether the Second Amendment protects a right that extends beyond the home.

4. How Far Does the Second Amendment Extend?

When it decided landmark Second Amendment cases in 2008 and 2010, the Supreme Court left for another day the issue of whether the right extends beyond the home.

Alito asked Dearing, the city’s lawyer, whether he concedes that the Constitution protects “possession of a firearm outside the home under at least some circumstances.”

Dearing replied: “The Second Amendment has something to say about what effective possession in the home means. And sometimes that may mean that you need to be able to … undertake certain activities outside the home.”

That basically gives the case away, if the justices reach the merits.

But after an hour of argument, it’s unclear whether a majority of the justices thinks the case is moot. Based on their questions (which do not always reflect how a justice ultimately will vote), Gorsuch and Alito think the court should reach the merits, while Ginsburg, Sotomayor, and Breyer think the case is moot.

Preferring to play it close to the vest, Roberts asked only a few questions.

Whether or not the justices end up ruling on the merits, it likely is only a matter of time before the Supreme Court takes up another gun rights case.

The lower courts could use guidance from the Supreme Court about the scope of the Second Amendment—including what standard of review courts should use to judge restrictions on gun rights; what types of firearms, ammunition, and magazines states may prohibit; and whether states may require concealed-carry permit applicants to show a “good cause” before obtaining a permit.

In any event, this Supreme Court term is not short on blockbusters. Other cases involve abortion, the Trump administration’s attempt to end the Deferred Action for Childhood Arrivals program, and whether federal law prohibiting sex discrimination covers claims of discrimination based on sexual orientation and gender identity.

Like those cases, the Supreme Court’s ruling in the New York handgun case likely will come by the end of June.

Images courtesy of U.S. Marshals Office of Public Affairs and Supreme Court of the United States