The economic numbers clearly have improved on President Donald Trump’s watch, with unemployment down and consumer confidence stronger.

“Economic growth has topped 3 percent,” Trump said Thursday at a White House event while addressing his administration’s reduction in regulations. “Two quarters in a row, except for the hurricanes, we would have almost hit 4 percent, and you remember how we were doing when I first took office.” 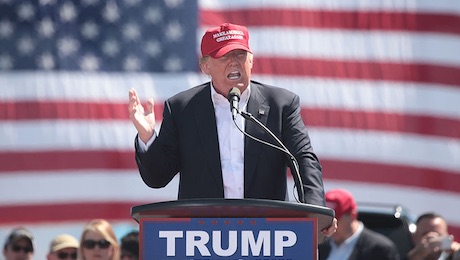 Since Donald Trump became president, GDP has nearly reached 4 percent, the stock market has hit record highs, companies are coming back to the U.S. and consumer and employer confidence are up.

“This country was going economically down,” he said. “Small business optimism is at its highest point in 34 years, and we are just getting started.”

Trump touted the coming benefits of tax reform, as Republican lawmakers iron out final details of their bill, and noted that his administration so far has killed 22 regulations for every one added. The president’s original executive order called for elimination of two regulations for every new one.

The debate with any president comes with how much credit or blame his policies deserve for the economy’s performance, and how big a factor his immediate predecessor’s policies are.

Some experts are more cautious than others in giving Trump credit.

The National Association of Manufacturers’ survey of members found that 94.6 percent of respondents had a positive outlook for their companies for 2018. That is the best result in the survey’s 20-year history, and up significantly from the survey done in late 2016, when positive outlook hit 63 percent.

This rosy attitude can be in part attributed to Trump’s policies, said Jay Timmons, president of the manufacturers association.

“Most of our respondents were talking about pro-growth tax policies and getting around the regulatory morass, and those are the two big priorities for manufacturers,” Timmons told The Daily Signal in an in-person interview. “The third priority [for manufacturers] is infrastructure. Those are three big priorities for the administration. This will encourage hiring and investment.”

Consumers are spending more money, but expanding companies’ physical investments—buying a major tool, a truck, a facility—will be the real measurement, said Salim Furth, a research fellow in macroeconomics at The Heritage Foundation’s Center for Data Analysis.

“The good direction of the economy in 2017 is largely a continuation of the strong economy that started in 2014, when we’ve had a huge decrease in energy prices because of fracking and low inflation,” Furth told The Daily Signal in a phone interview.

Attributing economic growth to one president is difficult, but the benefits of fracking—the extraction of fossil fuels from rocks—are clear and provable, Furth said.

But Trump should be credited as the “fountainhead of the current economic boom,” said Alfredo Ortiz, president of Job Creators Network, a pro-business advocacy group.

“His long and deeply held commitment to tax cuts and deregulation, among other policies, has given small businesses—and for that matter, all businesses—the confidence and ability to invest, hire, and expand, generating the current economic boom,” Ortiz told The Daily Signal in a written statement. “Now President Trump must continue to leverage his leadership skills to get his policies across the goal line and consolidate these gains.”

1. Growth Gets Closer to 4 Percent

The gross domestic product grew by 3.3 percent for the third quarter of 2017, as the Trump administration touted the goal of achieving 4 percent growth.

The White House Council of Economic Advisers estimates that without the major hurricanes, growth would have reached 3.9 percent. During Obama’s administration, annual growth never reached 3 percent.

Household wealth jumped by $1.7 trillion to a record $96.2 trillion, according to the White House, and almost 1.4 million Americans dropped off the food stamp rolls since January, when Trump took office.

The unemployment rate fell to 4.1 percent for November, the lowest since President Bill Clinton 17 years ago.

The stock market performed well during the Obama administration, but hit new records under Trump.

“Because of our regulatory and other reforms, the stock market is soaring to new record levels, 85 [times], not including today. Hopefully, we’ll set another one today, 85 times since Election Day, creating $5 trillion of new wealth,” Trump said during the White House event. “And the $5 trillion was as of about three weeks ago, so I assume we probably hit $6 trillion almost.”

3. Companies Are ‘Coming Back Fast’

Trump delights in touting examples of companies that are making major new investments in the United States.

Some examples during the year include:

To the degree that the economy is a self-fulfilling prophecy, business leaders, economists, and ordinary Americans seem to be feeling better about the days ahead.

The Conference Board’s Consumer Confidence Index rose for the fifth month in a row in November, to a 17-year high of 129.5.

The Wells Fargo/Gallup Small Business Index found that optimism among small businesses held steady in the third quarter after the biggest increase in decades during the second quarter.

One thought on “4 big signs of a Trump economic recovery”