Voter fraud is too nominal to make a difference in any given election, goes one popular line of argument. But tell that to voters in parts of Florida, Missouri, New York, and North Carolina in recent years.

Now, with millions of Americans homebound because of COVID-19, progressives are amping up their push for national mail-in voting as Michelle Obama throws her support behind related legislation purporting to be a response to the pandemic.

What neither the former first lady nor the bill’s Democrat sponsors in the Senate, Ron Wyden of Oregon and Amy Klobuchar of Minnesota, have talked about are various provisions of the legislation that would allow for ballot harvesting. That practice was abused prominently in the largest voter fraud scandal of recent decades.

“It mandates states allow for ballot harvesting and vote by mail. On the whole, this has little to do with a COVID-19 response and a lot to do with the agenda the Democratic Party has proposed in the past,” Jason Snead, executive director of the watchdog group Honest Elections, said of the bill in a phone interview with The Daily Signal.

“They seem to view this as a politically opportune moment to advance legislation,” Snead said of Obama and other proponents. 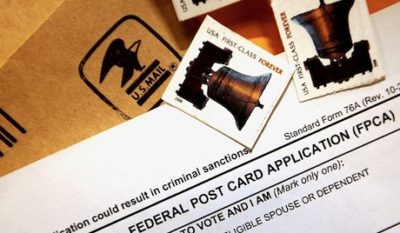 Courts in various states have had to throw out election results based in whole or in part on absentee voting fraud.

“States should be encouraging wide use of absentee voting in the primary season,” Snead said, adding that states also should prepare for contingencies during the November general election even though it’s too early to know what the coronavirus crisis will be like at that point.

“With ballot harvesting, the politically connected visit the homes of people and vote the ballots for them. These are victims often afraid of consequences,” Adams, now president of Public Interest Legal Foundation, an election integrity group, told The Daily Signal.

In the fallout from the Mississippi case, judges overturned the results of several races.

“You can’t overlook the importance of government jobs in the economically dependent areas,” Adams said. “Vote harvesters, in some cases, don’t have jobs and make more doing this than anything else in some parts of the country.”

“The largest number of voter fraud cases involve absentee ballots,” said Hans von Spakovsky, manager of the election law reform initiative at The Heritage Foundation, where he is a senior legal fellow.

Earlier this year in New Mexico, a man and a woman pleaded guilty in a scheme that involved falsifying absentee ballots in favor of a city councilman running for mayor of the town of Espanola in 2016.

Between 1992 and 2018, at least 20 voter fraud cases resulted in overturned elections, according to The Heritage Foundation’s Election Fraud Database.

“The problem with vote harvesting is that it destroys the secret ballot. It allows people to go into homes, pressure people,” von Spakovsky, who also is a former Justice Department lawyer, member of the Federal Election Commission, and member of the 2017 Presidential Advisory Commission on Election Integrity.

The Democrats’ legislation, called the Natural Disaster and Emergency Ballot Act of 2020, would require every state to offer at least 20 days of early voting and “no excuse” absentee balloting.

The rule in most states is that a ballot must be postmarked before Election Day. The Senate bill would force states to accept absentee ballots up to the point polls close, which voter integrity proponents worry would encourage vote harvesting.

The Klobuchar-Wyden legislation also states that local governments should begin processing absentee ballots up to two weeks before an election to avoid delay in certifying a winner. Currently, most jurisdictions don’t count ballots until after Election Day, in part to prevent voting trends from leaking out to the public or campaigns.

Here are 15 instances in which courts threw out an election result based in whole or in part on absentee voting fraud, from The Heritage Foundation’s database and other sources.

This case was more than a decade after the Florida Department of Law Enforcement concluded: “The absentee ballot is the ‘tool of choice’ for those who are engaging in election fraud.”

This 1998 report came after the department concluded an investigation of Miami’s mayoral election the year before. A judge had thrown out the result after prosecutors brought  a massive fraud case that involved more than 5,000 absentee ballots.

The 5th U.S. Circuit Court of Appeals affirmed the judgment. The Justice Department entered into a consent decree with Noxubee County’s superintendent of general elections, administrator of absentee ballots, registrar, and county government to prohibit discriminatory and illegal voting practices and require officials to report such incidents.

“Dozens of contests were overturned there by the state courts,” said Adams, who was involved in the case as a Justice Department civil rights lawyer at the time.

Evidence of voter intimidation and vote buying emerged and the Indiana Supreme Court ordered a new election. Pabey won with 65% of the vote, as detailed in the 2008 book “Stealing Elections” by journalist John Fund. The fraud led to at least seven convictions or guilty pleas in 2008, according to the Heritage database.