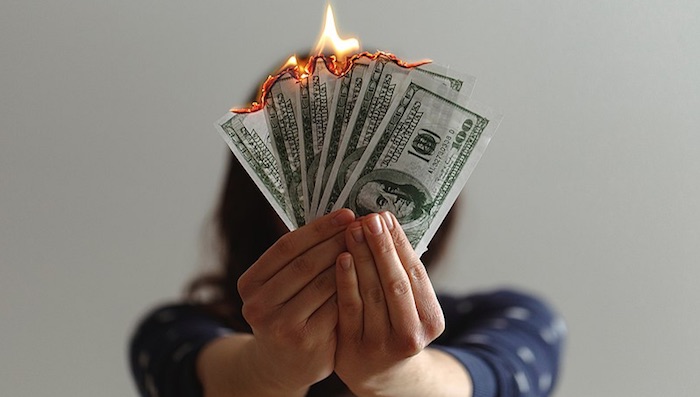 MONEY TO BURN: Gov. Phil Scott is warning Vermonters that an upcoming “perfect storm” of political circumstances is leading to record-high inflation rates for the U.S. dollar.

As House and Senate lawmakers continue to work out differences on how to spend unprecedented amounts of federal money available for the state budget, the governor warned that this money could be the state’s one chance for everyday Vermonters to economically survive a “perfect storm” of extreme inflation of the U.S. dollar.

“After seeing today’s inflation numbers, tax relief is more important than ever,” Gov. Phil Scott said last week at a press conference, in which he laid out his priorities for the budget.

The influx of federal funds helped smooth over that the state may have lost around $400 million in state revenue over the year following the COVID-related economic restrictions.

This week record inflation is getting significant attention by mainstream and alternative media.

Europe’s inflation rates are not far behind, CNBC.com reported on Wednesday.

“U.K. inflation came in at an annual 7% in March, its highest since for 30 years, driven by soaring food and energy prices,” CNBC reported. “… Consumer prices rose by 1.1% month-on-month, outstripping expectations for a 0.7% climb in a Reuters poll of economists, which had projected a 6.7% annual increase.”

The governor explained that the worsening economic climate is driving his decision making.

“We had a problem before this, this has just exacerbated that, and so that’s why I’m so focused on making the right investments in the budgets and all the money we’re receiving, the federal funds we’re receiving so that we can be better in the future,” Scott said.

The governor suggested that a combination of global events has contributed to the current economic crisis.

“Whether it’s Putin’s war in Ukraine or just the supply and demand as a result of the pandemic or the labor demographics that we are facing here in the state, it’s all, you know, this perfect or imperfect storm that’s really affecting the cost of living,” he said.

For the state budget, the governor would like to see more funds geared towards tax relief as well as aiding affordable places to live, and working on drug abuse prevention — especially in regards to the prevalence of fentanyl in Vermont’s drug trade.

“There are some significant differences in the House budget that I have said need to be addressed before I can support the bill,” Scott said. “Such as investments in housing and economic development that don’t include poison pills, along with other things that I would like to see included like more money for prevention.”

He also offered some insight on what it might take for him to sign off on the next state budget.

“At the beginning of the year I proposed to the legislature a budget that included major tax relief, and historic investments in housing, combating climate change, broadband, cell service, water and sewer, infrastructure, economic development, and more.”