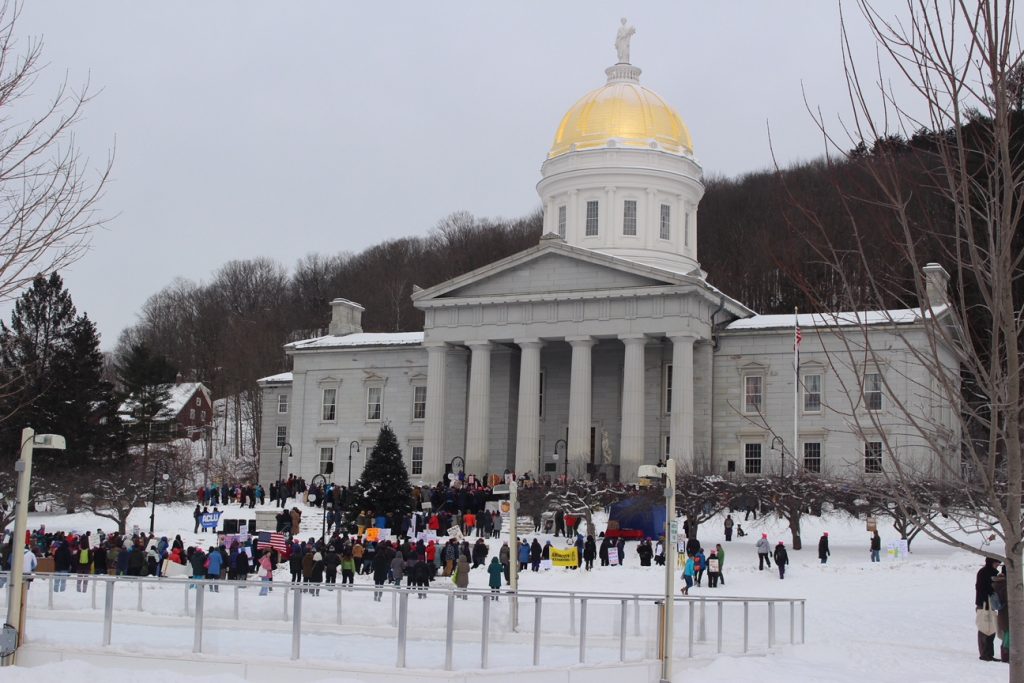 WOMEN’S MARCH: Frigid temperatures may have limited turnout for the 2019 Women’s March in Montpelier, which featured anti-Trump, pro-abortion, Black Lives Matter and other far-left movements.

MONTPELIER — A few hundred Vermonters on Saturday attended the local Women’s March, while others traveled Washington, D.C., to join the much larger national rally in the nation’s capital.

Like the rally of early 2017, the main themes were women’s rights and protesting President Donald Trump.

Nationwide, this year’s march has been mired in controversy. Women’s March co-founder Tamika Mallory has come under criticism for her high praise of Louis Farrakhan, leader of the Nation of Islam. Farrakhan has made racist remarks about Jews and the LGBTQ community.

“I’m not an anti-Semite. I’m anti-termite,” is one infamous Farrakhan quote from last year.

The Women’s March leaders’ associations with Farrakhan have caused nationwide outrage, even from left-wing groups including the Democratic National Committee and NAACP, both of which boycotted Saturday’s march.

Out in Humboldt County, Calif., another controversy swirled about as organizers canceled the local march over brazenly racist claims that the participants would be “overwhelmingly white.”

“Up to this point, the participants have been overwhelmingly white, lacking representation from several perspectives in our community,” the group’s Facebook page read.

Locally, however, protesters seemed mostly organized around a common dislike of the president.

Marilyn Malmquist, of Corinth, said she braved the cold weather to protest Trump.

“A lot of I think is just the way he is using emotion to get people angry and fearful of immigrants,” she said. “I think there’s a very dangerous tendency towards not acknowledging white nationalists and all these things that I’ve never believed in, and all of the sudden they are part of the government.”

Asked if she thought Vermont has white nationalists, she replied, “Oh I’m sure, I get the Southern Poverty Law Center’s information, and yes, they are apparently here. I’ve seen the Confederate flags,” she said.

Malmquist said she wasn’t familiar with the Women’s March leaders’ ties to Farrakhan. However, she said hate speech from any source, including from the March’s leaders, is unacceptable.

“It’s unfortunate, and we’ve got to strive to work together and not really tolerate racism in every case,” she said.

Andrea Z-Covey,  of Peacham, noted the turnout in Montpelier was not quite what it was two years ago, which was well over a thousand protesters. This year’s protest was in the hundreds.

“The turnout was OK, not as big as the first year,” she said. “But it’s OK — there’s a lot of people there, a lot of support, great signs. … It was mostly about just continuing to stand up for people of color, the LGBTQ populations, and just people who are just not heard often.”

Z-Covey suggested the decision to cancel the Humboldt County, Calif., march because it would be attended predominantly by white people was a puzzling decision.

“I can kind of understand it, it does often happen I think,” She said. “Yet I think we just need to keep those conversations open and going, and the only way to get through those uncomfortable situations is to bring people together and to keep giving support and to encourage conversations.”

She added that news about the rejection of whites in the California march might also be “trolling to take attention and support away from the whole movement.”

Ann Burcroff, of Montpelier, shared her thoughts on the march.

“I need to keep pushing the young ones, and I’m happy to see them out there working not only for women’s rights but women-power. There were lots of Black Lives, Abenaki women who spoke first and they had a wonderful talk about this being our land, and [about] women being the only part of human beings who can bring a new person into the world.”

The 2019 Women’s March took place just days after the men’s shaver company Gillette released a pro-feminist, anti-masculinity advertisement that shows men shaving off their beards while slogans about male privilege and male-based harassment play in the background.