BURLINGTON, Vt. — With the June 27 City Council special election for New North End residents behind them, some folks are now wondering if their newly elected councilor, Democrat/Progressive Ali Dieng, will honor a campaign promise he made about the contentious North Avenue Pilot Project.

Dieng’s promise, to vote the way his constituents wish concerning the controversial bike lane configuration, was made at a May 24 Neighborhood Planning Assembly meeting for Wards 4 and 7. The exchange was recorded on video by Burlington’s CCTV Channel 17.

During the televised meeting, local activist Karen Rowell asked then candidate Dieng, “If the last survey shows that the New North End does not want these lane changes, as per the amendments attached to the pilot that say we get to decide, will you vote yes or no on that question?”

Dieng replied, “If I am elected as your city councilor, what the people say, that’s what I will do. The people who bring me there, I am going to be their representative.”

Dieng’s first chance to honor his promise comes on Monday as City Council will vote on a proposal to change North Avenue from four lanes to two, plus a middle turning lane and bicycle lanes on each side.

While the Department of Public Works will recommend the bike-friendly configuration at the meeting prior to the vote, Ward 7 residents don’t want the bike lanes. According to Rowell, residents of Wards 4 and 7 have on three occasions since 2015 said no to the proposed lane changes — most recently in a new survey conducted by the Castleton Polling Institute of Castleton University.

The decision by city officials to push the bike lanes anyway has led to widespread anger and divisions in the community, and even to a fight over the survey itself.

A public meeting with council members held July 6 had neighbors taking sides on how the latest Castleton survey was conducted. One Ward 7 resident stood up and told council members supporting the project, “You have your plan and you’re going to follow through with it and do what you want, not what we (the voters) want. I know that’s what you’re up to.”

Burlington resident Deborah Boutin countered: “We’re all trying to do what’s best for everybody. I’m troubled by the sense that there’s this agenda that people are trying to ram down throats. I do believe sincerely that everything’s being done in the best intentions. I do believe that.” 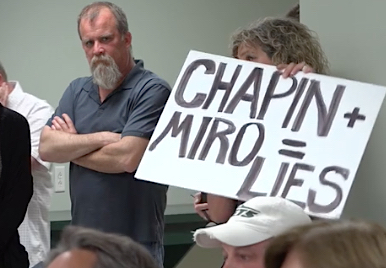 During the meeting Rowell displayed a hand-made placard reading, “Chapin + Miro = Lies.” She addressed councilors and attendees while holding the sign.

“(Mayor) Miro (Weinberger) said the survey would be mailed to everyone in the New North End in the spring — not true. (Director of Public Works) Chapin (Spencer) said, ‘It could not be done’ — not true. Someone talked to Castleton Polling and they said it could be done,” Rowell said.

Yet another Ward 7 resident told the gathering that she feared city officials were relying primarily on the electronic survey, not the mailed paper version. “There are many older people who live in the New North End who are not using computers, who are not comfortable with that. And I feel as though their voices may not have been heard and then your results, perhaps, may be skewed,” the resident said.

Leading up to last month’s special election, voters opposed to the project had backed Republican Vince Dober for office, but he was defeated along with independent candidates Ellie Blais and Chris Trombly. Dieng won the four-way race handily.

“If Dober had won, there would have been three councilor votes against the North Avenue plan,” Rowell told True North Reports. “That would have looked bad for the city, but the dynamic changed June 27.”

Since the June 27 special election, Rowell and other neighbors have kept Dieng’s feet to the fire regarding the campaign promise he made about voting with his constituents.

“I asked Ali right on camera how he would vote on the North Avenue Project,” Rowel said. “You can watch the video for yourself, it’s online.”

“Ali’s now on the record and you can watch the video where he promised,” she added. “So Monday’s Council vote is going to be watched by everyone.”

Last week, Republican Councilor Kurt Wright of Ward 4 told New North End residents that he intends to introduce a motion for a second citywide vote on the North Avenue Pilot Project at Monday’s meeting. Wright said that the question would have to be on citywide ballots according to the city attorney, but he is focused on the results from the wards in the New North End.