According to a recent survey by the Washington, D.C.-based personal-finance website  WalletHub, when it comes to charities among the 50 states, Vermont has the most charities per capita. Yet the state did not make the top 20 list of most charitable states. 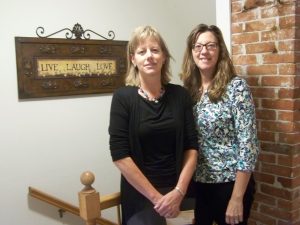 VERMONT GIVING: Vermonters tend to give more to local charities than on a statewide level, according to Joanie Praamsma of the Pregnancy Resource Center of Addison County. (Pictured: Praamsma, left, with Client Services Director Fawnda Buttolph)

The site’s rankings are based on Giving Tuesday and focus on the year-end charitable season of giving. The event was created six years ago by the New York-based Belfer Center for Innovation & Social Impact.

According to WalletHub, Vermont has the most charities per capita, at 27.14. This is more than four times Nevada, the state with the fewest in-state charities, at 5.95.

Nevertheless, the Green Mountain State didn’t make it into the top 20 most generous in the United States. Vermont ranks 33rd among the 50 states when it comes to charitable giving.

“With a third of all annual giving taking place in December, and the U.S. ranking No. 5 overall in the 2017 World Giving Index, our report on 2017’s Most Charitable States includes a charity calculator to help donors decide whether to give time or money for maximum philanthropic impact,” WalletHub’s Communications Manager Diane Popa told True North Reports.

WalletHub reported the following data on Vermont collected by its survey takers:

WalletHub survey analyst Jill Gonzalez told TNR that, at least in terms of volunteering, Vermont does quite well compared to rest of the United States.

However, when it comes to charitable giving, in terms of out-of-pocket money, the picture looks very different, Gonzalez added.

“Less than one percent of Vermonters’ income is donated. Fortunately, it appears that Vermont’s residents — 44 percent of them — prefer to donate their personal time (rather than money).” Gonzalez said.

“That’s certainly helpful since the state has the highest number of public charities at over 27 per 10,000 residents,” she added.

When it comes to helping out those in need, in the true sense of the old adage, time is just as valuable as money in the minds of most Vermonters.

Joanie Praamsma, executive director of the nonprofit, faith-based Pregnancy Resource Center of Addison County in Middlebury, agrees that Vermonters are somewhat cautious when donating their hard-earned money to charity. However, she suggested that it is born of good old-fashioned New England pragmatism.

“I used to work for a statewide nonprofit, so I have the perspective from giving at a statewide level to giving on the local level,” Praamsma told True North. “I observed that I didn’t see as much giving on the big level as much as you do locally. Vermonters like their towns and villages. Thus, people appear to give more on a very local level. I’d suppose that’s because donors are more simply more connected to their own communities.”

As far as the current state of volunteerism goes across Vermont, Praamsma said she gives it a “big thumbs up.”

For example, we have three volunteers working in our Middlebury office right now, with a total of six volunteers who help us out for certain events. And then we have to count the 15 generous churches and their congregations who help us, too. So far, we haven’t lost a single dedicated volunteer.”

One thought on “‘Tis the season: When it comes to volunteerism and giving, just how generous are Vermonters?”