A new report from the University of Vermont shows that town police spending decreased slightly this year, marking a reversal from previous years when spending on local police increased. Several Franklin County towns saw large changes in the amounts spent on police services. 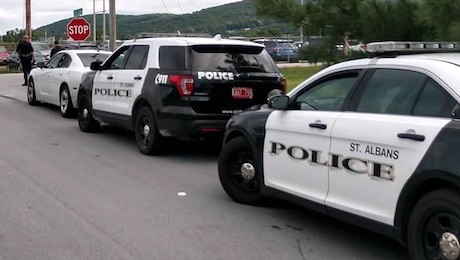 A little more than 50 of these towns have their own police department and the rest contract with state police or sheriff’s departments.

“In the future we are going to try and look at the why’s behind it,” said Emily Anderson, the lead researcher. “For now it was such a challenge to get together the budget information, bare numbers are really our focus here.”

Anderson thought that some of the increases and decreases in the police budgets could be due to some towns changing their contracts from the state to local sheriffs, adding or removing positions in the department.

Amber Baker, the Georgia town administrator, said the town’s $112,500 spending on police — up nearly 14% from last year — increased due to higher annual contracts as well as contract renewals.

The town of St. Albans proposed police budget is $1,208,868, a 40.91% increase over last year. Town Manager Carrie Johnson said the town previously had a contract with the city of St. Albans Police Department for over a decade, but their contract is set to expire on June 30, 2021.

While bidding for contracts over summer 2020, the town went with the Franklin County Sheriff’s Department. The bid with the city would’ve resulted in a 50% to 70% increase from last year, according to Johnson.

Town officials in Fairfax reported about a 35% increase from last year, due to an increase in the cost for a contract with the Franklin County Sheriff’s Department. The 2021 proposed budget, recently passed with 560 for and 273 against, allotted $173,520 for law enforcement. This accounts for nearly 5% of the total budget.

“We need to be competitive, especially with all of the challenges that we are having, and have had, with hiring the best qualified folks,” said Grismore. “Historically, our sheriff’s department has been among the one or two lowest paying agencies in the state of Vermont.”

Following the steep rise seen this year, Grismore says the contract increases in the years to come can be expected to plateau.

This is a sharp decrease from last year, by over 30%, averaging out to over $400 police spending per person in the city.

The City of St. Albans Police Department also receives benefits. City Manager Dominic Cloud said that in FY21, it was a regional police agency that covered the town and city, but in FY22, it just covered the city and reduced the number of officers because of the reduction in the service area.
Four patrol officers, two detectives and an administrative position have been cut for the city.

Some of the other towns in Franklin County included in the study were Swanton, Highgate, Fairfield, Bakersfield and Berkshire.

Swanton proposed $1,403,690 for their general budget with $131,495 being appropriated to the Swanton (Village) Police Department.

Reggis Beliveau, Swanton Village Manager said, “everything was level funded for the police budget for this year, the only thing that is increasing is the general budget.”

Beliveau said that this budget is increasing because of adding an additional part-time staff member during the summer to help out at the parks.

Highgate proposed a general budget of $1,116,537, with 9.01% of that budget going towards Highgate Police and Constable, which comes at $100,633. This is a 7.98% increase from last year’s financial year. Highgate officials said that this increase is due to the increase in operating costs.