Two Democrats are seeking a spot on the November ballot when Vermont voters go to the polls next Tuesday and decide their attorney general candidates.

Republican H. Brooke Paige and the Progressive Party’s Elijah Bergman are the only candidates from their respective parties. They are expected on Nov. 8 to meet either Charity Clark or Rory Thibault from the Democratic primary.

The attorney general’s seat has been in a state of flux in recent months. In June, T.J. Donovan, a Democrat, relinquished it after opting to take a job in the private sector. 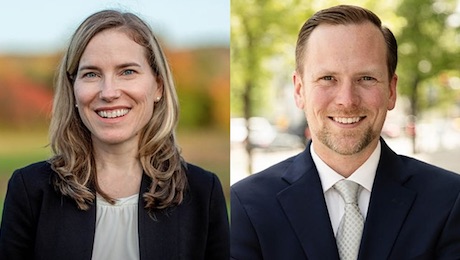 Two Democrats, Charity Clark, left, and Rory Thibault are seeking a spot on the November ballot when voters go to the polls Tuesday and decide their attorney general candidates.

Republican Gov. Phil Scott appointed Susanne Young to fill the remainder of the term. Young, who did not declare an official party affiliation amid the appointment, is not running as a candidate for the post this fall.

Clark, who had served as chief of staff in Donovan’s office, is campaigning on small business protections, criminal justice reforms and combating violence against women.

“I have the experience Vermont needs,” Clark wrote on her website. “I know the issues our communities are facing, and I will bring a fresh perspective to the role of attorney general.”

Thibault currently serves as state’s attorney in Washington County. On his campaign website, he also touts his experience as a prosecutor and former Army officer.

He has singled out four specific priorities in the run-up to the primary: justice reform, defending democracy and fundamental rights, environmental advocacy and protecting all Vermonters.

“Vermont is a special place, yet we face challenges,” Thibault wrote. “I am running for attorney general to lead and advocate for Vermonters consistent with our most important values: equity, integrity and empathy.”

Paige has run for multiple statewide offices in the past, oftentimes concurrent with one another. The words “freedom” and “unity” are interspersed throughout his campaign website.

Bergman, in 2012, worked in U.S. Sen. Bernie Sanders’ 2012 reelection campaign before enrolling in the Northeastern University School of Law. He is an attorney with the law firm of Larson & Gallivan, where his website bio reads, “During law school, Elijah interned for public defender offices in Vermont, Massachusetts and California, as well as for Judge William K. Sessions III at the U.S. District Court of Vermont.”