President Donald Trump on Tuesday hailed the completion of 450 miles of border wall completed along the U.S.-Mexican border and praised the men and women of the U.S. Customs and Border Protection.

At a news conference held at the Mexico–U.S. border in Reynosa–McAllen, Texas, in the Rio Grande Valley, Trump said the border is more secure than it’s ever been.

“When I took office, we inherited a broken, dysfunctional, and open border,” he said. “We reformed our immigration system and achieved the most secure southern border in U.S. history. It is at a level that it’s never been before.

“We took on the cartels, the coyotes, and the special interests, and we restored the rule of law. For years, politicians ran for office promising to secure the border, only to get elected and to do the absolute exact opposite.” 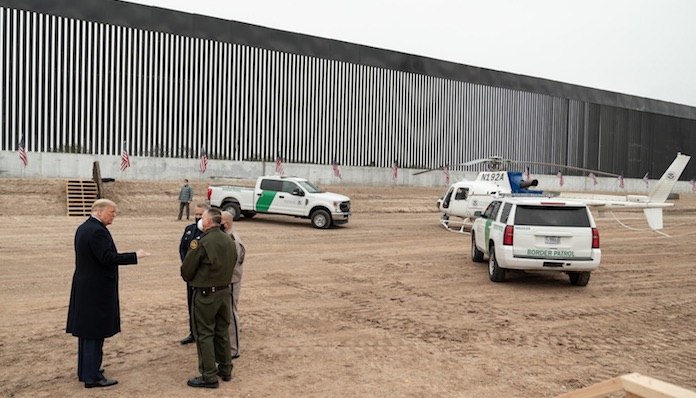 The president said in every region where the wall was built, illegal crossings and drug smuggling attempts plummeted.

Since the border wall extension began being built, ICE and Border Patrol have reportedly seized over 2 million pounds of fentanyl, heroin, meth, and other deadly narcotics, arrested nearly 500,000 onducmented immigrants with criminal records, and removed nearly 20,000 gang members from the U.S.

Several other policy changes were implemented under Trump, including transforming the existing “catch and release” program to “detain and remove,” and revising the country’s asylum program, which included signing an agreement with Mexico called the “Migrant Protection Protocols,” or MPP.

Trump took heavy criticism for one immigration policy early in his administration, separating migrant children from their parents as they attempted to enter the country illegally together. After significant backlash, the policy was scrapped.

Trump thanked the President of Mexico, Andrés Obrador, whom he said loves Mexico and the U.S. Obrador instructed 27,000 Mexican soldiers to help guard the southern border over the last two years.

“Nobody thought that was possible,” Trump said.

The U.S. also entered into three asylum agreements with the Northern Triangle countries of Guatemala, Honduras and El Salvador. Under the new and current policy, if undocumented immigrants are arrested at the U.S. or other borders, they can be sent to a neighboring country instead of kept in the country they are apprehended.

As a result of these agreements, 98 percent of those apprehended and remanded to Department of Homeland Security custody were removed, according to a recent DHS and DOJ report.

“Simply put, if you enter the United States illegally, you are apprehended and immediately safely removed from our country,” Trump said. “Without this core principle, there is no border, there is no law, there is no order.”

On the issue of law and order, Trump briefly addressed the events of last week when a group of people wearing Trump clothing stormed the Capitol, saying, “As I have consistently said throughout my administration, we believe in respecting America’s history and traditions, not tearing them down. We believe in the rule of law, not in violence or rioting.”