On Town Meeting Day, on March 5, the voters of Arlington will be asked to vote yes or no on a simple question: “Should the Town of Arlington hire a Town Administrator?” The question had been put to the voters in 2011 and was narrowly defeated.

Not unlike many other small towns in Vermont, Arlington, population 2,300, has its Selectboard members carry out many of the day-to-day operations of the town. They do the best they can with so little time in which to do so — only one of the five is retired. 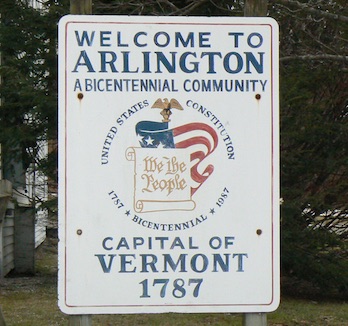 Arlington was the first capital of the Vermont Republic.

What a town administrator could carry out in a full-time position cannot be accomplished by the Selectboard members no matter how conscientious, diligent and responsible they might be.

Since 2011, the operations of a Vermont village or town has only become more complex with state and federal regulations. Several years ago, the state’s Legislature mandated the cleaning up of all drainage issues that impact Vermont’s rivers and streams; this is just one case in point.

A few years ago, the voters of Arlington agreed to have the town government take over the Arlington Water Co., a 100-year-old private water company that serves approximately 600 homes and businesses. Paralleling this undertaking, the town took over ownership, operations, and maintenance of the Arlington Recreation Park, considered by many to be the jewel of Arlington.

Each of these acquisitions comes with enormous responsibilities that fall on the shoulders of the town’s Selectboard members.

Meanwhile, since the last town vote for a town administrator, the town has lost its sole representative to the Vermont Statehouse (currently, we share with Manchester). Moreover, the long established Catholic Church closed its doors, dozens of what were once attractive residences have become blighted, and the town’s Chamber of Commerce merged with Manchester’s Chamber (it too has since closed).

To compound the above, the town has lost a substantial number of its school population — in the hundreds. This has had a corresponding impact in that there is also a huge loss of young people, as they are unable to find workforce housing in Arlington. Small businesses, in addition to finding it difficult to staff, also find expansion out of the question due to a lack of wastewater treatment capacity in the town.

Arlington is one of the few towns in Vermont that has an unusual employee to resident ratio. There are approximately 1,050 employees working in the town (the Mack Co. alone has 546). It is estimated that more than half of the employees don’t live in Arlington.

If Arlington indeed had the benefit of more employees living in town, the town’s declining school census would not be an issue. Nor would there be a problem finding volunteers for the town’s fire and rescue services, as well as other volunteers for nonprofits and municipal boards.

Cost is always a concern when change is recommended. In the case of establishing a full-time town administrator, a part-time position is not practical based on the suggested job description. The annual cost in terms of taxes would be approximately $40 to $60, based on a home assessed at $200,000.

But as was pointed out in the study committee’s town administrator’s report, if the town had a town administrator in place, Arlington could seek out the numerous grants that it qualifies for as a rural town, but is not receiving.

Guilford is an example worth noting. That town, similar in many respects to Arlington, several years ago witnessed its newly appointed town administrator bring in millions of dollars in grant funds — $1.7 million in her first year of service.

A town administrator also will coordinate the many town services, look into economic development and new housing opportunities, and continue to engage with Arlington’s art, cultural and historic development now taking hold.

A town administrator for Arlington should have been in place several years ago. Let’s not miss the opportunity now — a yes vote on March 5 will make this happen.

One thought on “Keelan: Town administrator for Arlington a good idea”