Editor’s note: This commentary is by Lynn James Edmunds, of Wallingford.

Most Vermonters don’t hear or pay attention to the constant drone of legislation consuming their standard of living anymore, perhaps due in part to a realization that our government never seems to listen anyway. But what if that deafness was merely a result of lawmakers being distracted from their true purpose?

For many years this very subtle sound or drone has been incrementally chipping away at our foundations of liberty and free enterprise, supposedly in pursuit of good cause. But that droning sound has grown much louder recently, sounding more like a formation of bombers flying low over the horizon as they near the drop zone of their mission.

If we are to survive such a raid, Vermonters need to hear and understand what is about to happen with new storm water rules as they become weapons turned on private property owners. This attack cannot and will not be turned back by the acceptance of our omission from this legislative process that has turned against us — clearly there are more than just clean water agendas present. 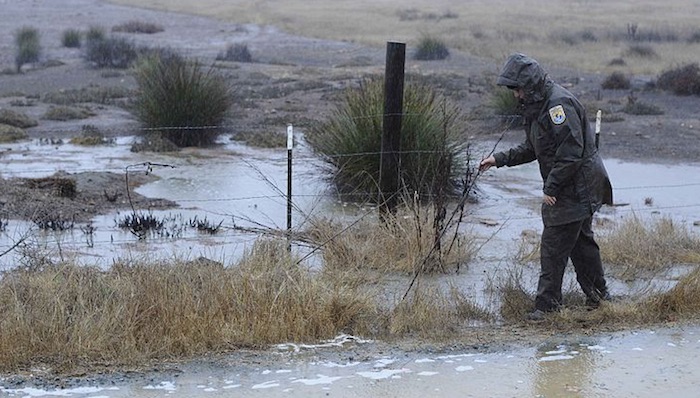 WATER RUNOFF: New “general permit” rules under Act 64 require properties with at least 3 acres of impervious surface to engineer changes that reduce runoff or else pay one-time fees of $25,000 per acre. The per-acre fee within certain watersheds is set at $50,000.

A call must go out to all Vermonters: Put aside your political party thinking, don’t be fooled by the shield of good intentions, find out what is really happening to our state, and let those who perpetuate it know you will not be fooled or left out of the equation any longer.

The Vermont Department of Environmental Conservation (DEC) held a public hearing in Rutland on Oct. 28th, 2019, to solicit public comment on rules for mitigating stormwater runoff from properties of 3 acres or more of impervious surface. They came armed with a 24 page draft list of sites that had been identified by aerial reconnaissance as targets for compliance with GP 3-9050 rules developed for Vermont’s clean water Act 64, which passed in 2015. The DEC adopted these 3-Acre Rules in February of 2019; they took effect March 15th and will start phasing in by mid-2020.

Having attended the public forum, and after learning more about these new rules, one realizes there are many devils in their details. But for those unfortunate enough to be on the list of targets as this campaign begins, it must feel like waiting for a military assault to start without proper defenses, while knowing this war was started by those representing you — the very same people who are supposed to protect your property.

But your protection is omitted and you are brought like a sacrificial lamb waiting to be slaughtered to appease the gods of a greater good and a higher cause. Still, you wonder how could this happen and why have I been excluded and cast out by my own government as a sacrifice.

Many incremental changes have taken place in our governance here in Vermont over the last 50 years. And while it seemingly appears to have stayed the same, the structure has become one that excludes the people by their omission. A minutia of criteria that seeks to silence the people by that omission has become an art form used by those who wish to control the narrative, essentially removing us from the process of self governance. Our agendas are set for us with little concern for our priorities because, to the power brokers, we do not exist, and now they are free to lobby for their hearts’ desires and plunder in the name of a good cause with the cronies of their choice, like special interests with ties to global social engineering efforts.

Agendas that are not legislated are handed down to our municipalities through a conduit of 11 Regional Planning Commissions. These agendas come with an implied mandate that triggers most towns and cities to self-inflict them through their local zoning while thinking they have little choice but to comply, even though many agendas are not necessarily based on a statute, nor are they mandated.

Town plans once considered the basis for establishing local zoning, and a resource for development, are now used to insert action items from a menu of topics provided by your regional planning commission and organizations like the Vermont Council on Rural Development (VCRD). One of their favorite tactics, community visits, is where they solicit your ideas that somehow coincidentally mirror a menu of their agendas, thus transferring ownership to you when you click on one and, presto, an activist is born with a local committee or commission to go along with it. (Check your town plan; action items began showing up there a little after the Paris Accords in 2015.) Next, if there is pushback as the town tries to implement the idea, we are reminded this is what a significant number of your peers said they wanted at a community meeting — or in other words, this was your idea. This tactic is simple but very effective.

When it comes to legislation it is no surprise most bills that would not be well tolerated by the public would be phased in gradually, as rules are crafted by the so-called experts who often lose sight of the people who must live with them. But this time, when it comes to the 3-Acre Rule, it is hard to even imagine coexisting with the magnitude of such onerous mandates, and there is little comfort in the notion that funding somehow would lessen the negative impact on property owners or our economy.

Perhaps the scariest information presented at the 3-Acre Rule forum was it could, in fact, cost a property owner more to comply with this mandate for engineering and impact fees than their property is worth. How does that benefit Vermonters trying to maintain an affordable existence in our state? On the contrary, it will destroy what many have worked long and hard to achieve.

Sen. Brian Collamore, a Republican, showed great concern at the hearing. An article in the Rutland Herald (“Senator wants stormwater rules delayed”) shows he considers this threat to the public and our Vermont economy very serious and has begun taking steps to address it.

Sometimes in our haste to do good things we ignore others by their omission, choosing to focus on the good we are trying to accomplish at the expense of those left out. This appears to be such a case, but that aside, it is concerning that so many of our legislators prioritize agendas of special interests over the people they serve. They allow themselves to be so distracted from a discipline of self governance that they forget its purpose and omit the well being of their peers. Perhaps the understanding of that purpose for which they govern eludes them. But who advocates for the people when they have been cast out?

When looking at legislation, any bill that must be phased in could have the potential of becoming punitive in nature. Likewise, if legislation contains exemptions in order to pass, most likely it would not be well tolerated by the public if applied to everyone at the same time, excluding the feasibility of logistics. But when a bill becomes punitive as rules are written it will undoubtedly require more measures or program creation in the future for mitigating the damage it will inflict when implemented. In other words, punitive legislation and rules used as solutions compound the problem of affordability by becoming cumulative.

Consider this: The 3-Acre Rule rose to the level of crisis because it was easily identified as problematic by the immediate threat it poses to the public. But what about the many bills and rules of lesser consequence as they incrementally compound and frustrate our sustainability — do they mater less because they fly under the radar of an obvious or immediate danger?
Remember we keep adding to our affordability problem year after year and day after day, but we simply can’t keep legislating decline to fix decline, and at some point this cycle has to stop.

The answer to the affordability problem of our state is not found in programs for economic development, but rather lies in recognizing that punitive legislation with seemingly good intentions can become a curse of benevolent cause as it seeks to mandate outcomes by confiscation of property and wealth. Regardless of how noble and good the cause for legislation purports to be, we must not allow it to enslave us to the bondage of a mandate that says “damn the torpedoes, full speed ahead” in spite of the damage it will inflict.

Even the smallest decline when compounded over time is significant, but the curse of doing good work that yields damaging results is difficult for lawmakers to see when they are seeking equal outcomes rather than equal opportunity, or giving preference to some above others to somehow validate an acknowledgement of those who have sinned.

The discipline required for maintaining our constitutional republic in Vermont is not understood by those who currently represent us — they either do not see how they are damaging our state, or that is their intention. In either case, this must be addressed in 2020 given the pending attack on our way of life and system of governance. We must choose a path of liberty that preserves our constitutional republic or resign ourselves to the fact that, by the acceptance of our omission from participating in our self governance, we must be content living under a more communist-style rule.

Vermont’s clean water act is touted as an investment in the future, yet its 3-Acre Rule would confiscate private property by extreme measure to achieve that end. Those who create such legislation and justify it as an investment are perhaps ignorant of the fact that when we allow our property rights to be confiscated we are killing the engine of incentive that enables our free market system to flourish and produce its own prosperity, creating a higher standard of living for all.

The affordability of our state is a byproduct of that prosperity. But when punitive actions like these are taken against the catalyst which inspires our incentive to produce, it becomes a confiscation of our future, not an investment in it.

If the intentions of Act 64 are as pure as the water its advocates seek, such force of mandate would not be used to make us comply with engineering assumptions that may bankrupt us. There is no crisis of clean water here that would warrant forced compliance to address an immediate concern. On the contrary, this is billed as an investment for future generations, so why must we use methods of extortion to procure an immediate solution?

Something doesn’t add up. Are we being played by the power brokers who are currently in charge of Vermont? Why do our legislators not see this? Who is representing us? These are legitimate questions for anyone who cares about our state and all its people.

21 thoughts on “Lynn Edmunds: The structure of omission is controlling Vermonters”