Don’t look now, but the Battle of the Statues has reached Vermont.

All across the country, anarchists and other protesters are defacing or toppling the statues of American heroes. George Washington, Andrew Jackson, Christopher Columbus — if they contributed to American greatness, someone’s trying to pull them down.

And now, maybe, the battle has come to Vermont. 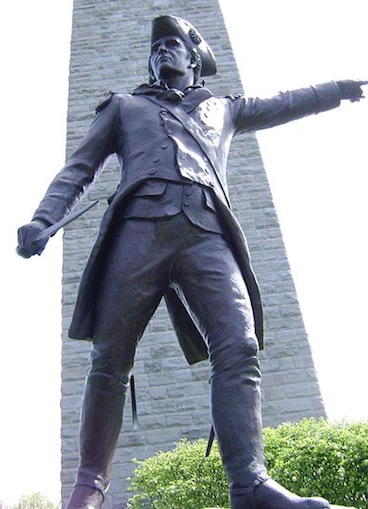 Statue of John Stark at the Bennington Battle Monument in Bennington, Vermont.

The Bennington Banner reported Monday that the sword in the statue of General John Stark is missing. Administrators at the monument site don’t know for sure who took it, or why. The Stark statue standing in front of the Bennington Monument celebrates the pivotal role played by New Hampshire general John Stark in the defeat of British forces in the Battle of Bennington August 16, 1777.

History records that on that day the general who coined the New Hampshire state motto “Live Free or Die” took sword in one hand and with the other pointed to the British and Hessian mercenary troops and yelled to his men, “Yonder are the Hessians. They were bought for seven pounds and tenpence a man. Are you worth more? Prove it. Tonight the American flag floats from yonder hill or Molly Stark sleeps a widow!”

If Stark hadn’t bravely led his troops that day, would they have defeated the British and Hessians? And if they had not, would American troops have defeated General John Burgoyne’s army at the Battle of Saratoga just weeks later? Saratoga has been called one of the most important battles in the history of the world because it turned the tide of the American Revolution.

John Stark earned that statue and the gratitude and honor it signifies. But now Vermont state officials aren’t even sure they want to replace the sword because the statue “might be perceived negatively,” the Banner reports.

RELATED: No, America is not plagued with ‘systemic racism’

Vermont State Historic Preservation Officer Laura Trieschmann reportedly said “from a cultural resource point of view, we would like to restore it. But the state wants to make sure the statue ‘is not perceived negatively’ before spending the money to restore it,” she reportedly told the Banner.

Whatever the motive for the removal of the sword, it didn’t happen in a vacuum. The desecration of statues nationwide is well-known. Here in Vermont, a “softer” effort to replace traditional Vermont history and its commemorative art is well underway. Last April the Legislature replaced Columbus Day with Indigenous People’s Day. Brian Cina (P-Burlington), the IPD bill, this year introduced legislation to require Abenaki place names at every state park. The effort is at least partly motivated by Progressive distaste for history that celebrates the European settlement of the United States.

The Vermont Senate is considering S.285, to introduce more ethnic and gender diversity to art on display at the Vermont State House. The bill was introduced by a senator who expressed displeasure at seeing too many paintings of white, male faces staring at her from the walls of State House committee rooms.

It’s unclear whether either bill will proceed this year.

23 thoughts on “Sword taken from Stark statue at Bennington monument”