TJ Donovan of South Burlington was elected Vermont Attorney General in 2016. He said this June he has “had conversations” about running for governor in 2020. He might also run for a third term as Attorney General. Based on recent public statements, what can Vermonters expect from either Gov. or AG Donovan on hot-button issues like marijuana legalization, abortion and illegal immigration? 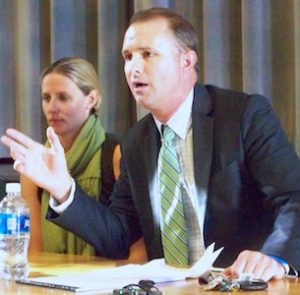 Marijuana – Donovan is a strong supporter of a legal, retail market for marijuana, he told WCAX August 29: by legalizing personal possession, “we have created this limbo in our state regarding marijuana,” said Donovan. The only solution is full legalization, he said: “It’s gotta happen. We’re past go on this, it’s gotta get done,” Donovan said.

Abortion – Planned Parenthood of New England August 20 thanked Donovan for helping set aside $750,000 of state funds to replace federal funding lost when  PPNE wouldn’t stop counseling abortions for low-income recipients of Title X services like cancer screenings and contraceptives. When the Trump administration last week reprimanded a Vermont hospital for forcing an anti-abortion nurse to help perform an abortion, Donovan called it “an attack on women’s reproductive health,” VPR reported August 28. He added, “I don’t UVM has done anything wrong.” His office would “do everything to defend” UVMMC.

At present only Rebecca Holcombe, former VT Secretary of Education, has declared as a Democratic candidate for governor.