Headliners recently reported that it’s okay to be an energy hog in Vermont if you operate a marijuana grow. Apparently it’s also OK if you are Sen. Bernie Sanders. His $300,000 nine-state October campaign tour in a rented jet was a real climate-warmer.

How much climate-changing carbon did that jet emit as it moved our junior senator farther and farther away from Vermont voters just a few weeks before the general election? Based on a string of admittedly best-guess computations, here’s our estimate: 133 tons of CO2, or the equivalent of 29 cars’ output for an entire year. 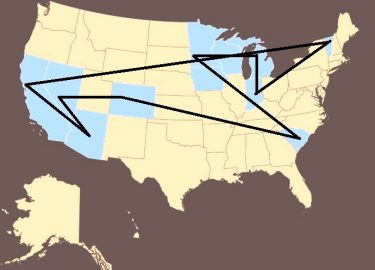 We know the Sanders campaign told VT Digger: “This cost ($300,000 for the jet) covered the entirety of the tour from Indiana, Michigan, Wisconsin, Iowa, South Carolina, Colorado, Nevada, Arizona, California, and back to Vermont.”

For the itinerary listed above, starting and ending in Vermont, Headliners estimates (using Google maps) that the campaign’s Apollo Jets rental flew 7,045 miles. That’s not an exact number. We know neither the precise itinerary nor whether the jet flew as straight as the proverbial crow. Could be more, could be less. But as mileage estimates go, it’s probably not far off.

We also don’t know the make or model of the jet. The Apollo website lists about 15 such jet aircraft. Apollo’s “featured” aircraft – the Falcon 8X – burns 453 gallons of fuel per hour, according to one jet geek website. If the jet traveled the 7,000 miles at its specified cruising speed of 336 MPH, it was airborne for 28 hours and consumed 12,684 gallons of fuel. According to the U.S. Energy Information Administration, jet fuel combustion emits 21 pounds of CO2/gallon — about 10 percent more than gasoline. So the grand estimate of carbon emissions from Sanders’ trip is: 266,364 pounds, or 133 tons.

It’s fair to ask: so what? Other candidates aren’t criticized for the expense or carbon output of a campaign jet.

But other candidates aren’t Bernie Sanders, who on the same day he was jetting around the country tweeted, “Climate change is a planetary crisis. Our task is clear. We must take on the fossil fuel industry that’s largely responsible for global emissions and accelerate our transition toward energy efficiency and sustainable energy sources.”

Bernie could have opted to “accelerate our transition toward energy efficiency” by flying coach or taking a train or both. But he didn’t. So the next time he (or a Vermont “climate leader” who ignored Sanders’ inconsistency) urges us to sacrifice money, comfort or convenience, why should we take him seriously?

Answer: we shouldn’t. There are better ways to reduce carbon emissions than to zap the sheep with the cattle prod of expensive subsidized power, devalued pensions, and carbon taxes. For example: support nuclear and hydro power. Let consumers, not government, pick the winners in the technological race for clean power at home and on the road. Insist that mega-polluters China and India imitate the U.S. reduction in energy generation emissions. Closer to home, insist the marijuana industry meet responsible emissions standards, or go elsewhere.

Fair is fair — even for ambitious U.S. senators and the marijuana industry.

4 thoughts on “State Headliners: Feeling the after-Bern on Bernie’s jet”