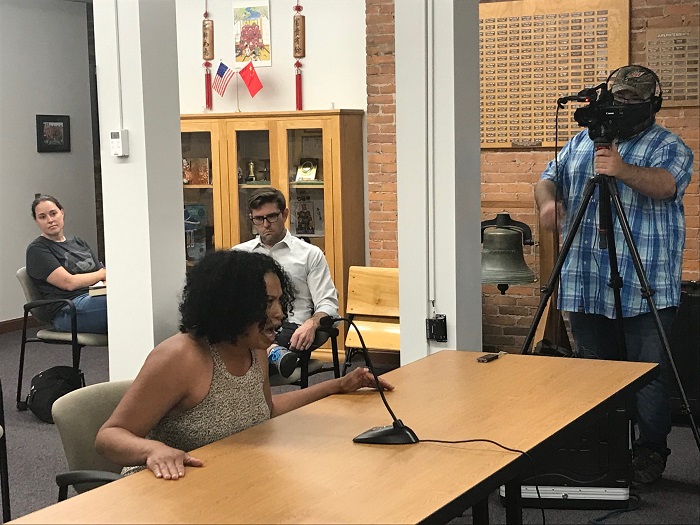 ENOUGH: Rutland resident Sherlyn Anderson, originally from Nicaragua, told the Rutland City School Board on Tuesday evening that they should focus on the education of students, and that changing mascots is expensive.

RUTLAND, Vt. — On Tuesday evening the Rutland City School Board held a public forum and again heard from both sides on whether to keep the Raiders name and arrowhead logo for its sports teams.

The outcome of Tuesday’s meeting shows there is ongoing division in the community over the mascot, and about whether the use of the name Raiders is racist.

While some students spoke in favor of the new student-created Ravens mascot, others advocated keeping the Raider name and logo.

“So my question to you guys is, did anybody ask my son who played in middle school if he wanted the name to be changed?” said Sherlyn Anderson, a parent who is originally from Nicaragua.

She noted that she was emotional when speaking about the issue.

“I teach my boys that we’re Indians, Central American Indians and we should love ourselves,” she said. ” … This is crazy — we should be teaching our children how to read, how to write, how to think like others.”

She also brought up the economics of changing logos.

“How much is it going to cost to change the name? A million? Two million? Do you know what you could do with that money?” she said.

“In a time when our nation is so divided on such a multitude of levels, the vote to change the Raider name breaks the bond of our community, robs us of our shared identity, and forces us into conflict with our neighbors,” he said. “The community voiced their displeasure at the recent school board elections, but even that wasn’t enough. … Does the school board represent the members of our community or do they buckle to the whims of a non-profit organization with their own political biases?”

At his turn to speak, resident Eric Solsaa spoke in favor of the new Ravens mascot.

“I don’t think we have to keep explaining that this imagery does hurt people. It’s thoughtless, and as the gentleman before had indicated, we do know better,” Solsaa said. “I think the children of this school were charged with coming up with a name and they did a great job, and basically what we’re doing now is spending a lot of time trying to come up with a way to undo something that does not need to be.”

Jake Pluta from Killington also spoke for sticking with the new mascot.

“I was a Raider, and if I choose to have children and raise them through this school district, I hope that they are Ravens,” he said. “And just in summary, I read a lot and I’ve heard from a lot of people, and I just think that the best thing to do is move on and continue with the new name that was chosen.”

Rutland City School Board Chair Hurley Cavacas, Jr. told True North in an interview earlier in June that he hoped this event would clarify the public’s position.

“They felt they were not heard or given the opportunity to give input or have a transparent discussion,” Cavacas said.

Cavacas was not at the meeting for personal reasons.

He also said he hopes some of the natives in the region can weigh in more.

“We have two Abenaki tribes up north,” he said. “They need input because they are the ones who were originally where the Raider name came from, in my opinion. And I believe they need to have a voice.”

Erin Shimp, who ran the meeting, said that it may be helpful that the meetings are now in-person again.

“There’s no right or wrong in this, but I want to make sure that we are keeping the students at the forehand. You know, we really wanted to hear from people and we’re back in person so hopefully, we can make some faster progress in one direction or the other.”

Cavacas, Jr. told True North on Thursday that the next step is a four-person committee – two pro-Raider and two pro-Raven – is reviewing with a lawyer to see that proper public meeting protocols were followed when the mascot was changed the first time. He said once this step is completed, then the committee can decide what comes next.