A recent decision by the U.S. Court of Appeals in a case arising from Minnesota strikes the right balance between First Amendment rights and the statutory right to be free from discrimination.

The ruling came in a case involving Telescope Media Group, which produces commercials, short films, and live-event productions. Owners Carl and Angel Larsen want to produce wedding videos, but, based on their religious beliefs, decline requests to do so for same-sex weddings.

State and local governments continue to enact laws prohibiting discrimination based on sexual orientation and, in many cases, gender identity in “places of public accommodation,” such as businesses. Courts are, therefore, increasingly called upon to address cases where those laws conflict with constitutional rights, including the freedoms of speech and religious exercise. 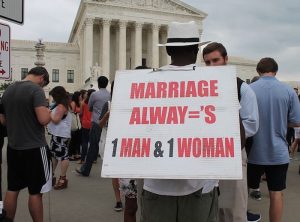 As any law student learns, one of the most basic First Amendment principles is that the government may not dictate what people can say. Perhaps the most important statement in Stras’ opinion, which applies to this entire category of cases, is this: “Even anti-discrimination laws, as critically important as they are, must yield to the Constitution.”

In the current social and political climate, these cases are easily, if not intentionally, misrepresented by ignoring some of the important rights involved. Focusing only on the civil right against discrimination makes it appear as though all these business owners want to do is discriminate.

The truth is that none of these businesses refuse service to gay or lesbian people, nor wish to do so. The vast majority of business activities do not affect anyone’s freedom of speech or religion.

These cases involve only situations where business owners decline to provide a particular product or service in a specific context, directly affecting First Amendment freedoms.

Last year, in a case involving Masterpiece Cakeshop in Colorado, the U.S. Supreme Court found in favor of the business owner, but focused on the state agency’s anti-religious bias in handling the case. The court did not address the broader issue of whether constitutional rights trump civil rights.

In the latest of these cases, the U.S. Court of Appeals for the 8th Circuit on Aug. 23 ruled for the business owner, concluding that the anti-discrimination law must give way to the First Amendment right to free speech, and possibly to the right to freely exercise one’s religion as well.

According to Minnesota, if the Larsens make wedding videos at all, they not only must do so for same-sex weddings, but those videos must depict same- and opposite-sex weddings in an equally “positive” light.

The Larsens challenged the law on seven different grounds, including that it violated their rights to both freedom of speech and the free exercise of religion. On Sept. 20, 2017, the U.S. District Court in Minnesota dismissed the Larsens’ lawsuit, rejecting every one of their arguments.

The U.S. Court of Appeals for the 8th Circuit reversed. The opinion in the 2-1 decision was authored by Judge David Stras, who was appointed by President Donald Trump in January 2018 after eight years on the Minnesota Supreme Court.

The 8th Circuit primarily addressed the Larsens’ free speech claim, and did so in a principled way that shows how such conflicts between constitutional and civil rights should be handled.

The court found, for example, that while producing videos involves actions, those actions result in media “for the communication of ideas.” By dictating how those ideas must be communicated, the Minnesota law “operates as a content-based regulation of their speech.”

As any law student learns, one of the most basic First Amendment principles is that the government may not dictate what people can say.

Perhaps the most important statement in Stras’ opinion, which applies to this entire category of cases, is this: “Even anti-discrimination laws, as critically important as they are, must yield to the Constitution.”

The rights to free speech and the free exercise of religion are fundamental constitutional rights. As James Madison wrote of the latter, it “is precedent in both order of time and degree of obligation, to the claims of Civil Society.”

The court also said that, because the Larsens are challenging the Minnesota law as a restriction not only of speech, but also of religious speech, their free exercise of religion claim can also move forward. That keeps the issue alive, despite Supreme Court precedents that have limited the First Amendment’s protection of religious freedom.

The dissenting opinion, by Judge Jane Kelly, sounds like a one-sided advocate’s argument, rather than a more balanced judicial analysis: “The Larsens filed this lawsuit to obtain an exemption that would allow them to deny service to same-sex couples.”

In other words, the civil right is the only one on the table, and the only issue is whether business owners should be able to violate that civil right.

Certain political forces today demand that we ignore First Amendment rights in complete deference to the civil right to be free from discrimination based on sexual orientation or gender identity. In other contexts, however, those same forces demand that constitutional rights must prevail. They can’t have it both ways.

The 8th Circuit in this case used the right priorities and a balanced approach to maximize liberty across the board.