A recent telephone survey conducted by Barre-based journalist Guy Page reveals that while nearly 50 percent of Vermonters are concerned about climate change, others aren’t so sure.

“Almost half of Vermonters responding to our survey … think the legislature doesn’t spend enough time on the issue,” Page told True North. 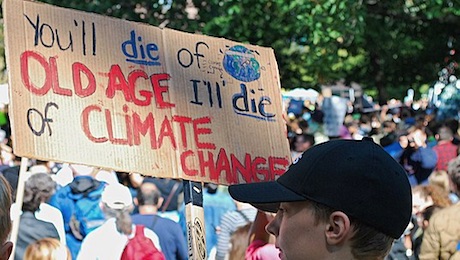 Some people fear that normal weather patterns might change dramatically in the future due to alleged global warming.

Page said that the survey results conducted for his Vermont Water Cooler aggregate news website show that 41% of respondents indicated “the legislature does not spend enough time on climate change issues.” Some 24% said “too much,” 19% “not sure” and 16% “about right” when answering the question.

“Since we knew that the legislature would be spending a lot of time on climate change this session, it seemed to be very important for Vermonters to have the opportunity (via the survey) to weigh-in on what they think is important; also for our policy makers to know what voters are thinking about,” Page said.

To collect the climate-change survey data, Page noted that his team used a system that’s called IVR or interactive voice response. The system uses a computer and robot-calling (or robo-calling) software to conduct automated surveys.

First, a computer is used to call and then interact with humans on the phone through the use of both voice and tone. Next, the computerized system repeats the same polling question, or questions, perhaps thousands of times, without ever wandering off the prepared script, as a subjective, error-prone human caller might do when faced with making many calls over an otherwise exhaustive period of time.

Water Cooler’s respondent poll, conducted Oct. 8-10, is reflective of those Vermonters with telephone land lines. So while the survey doesn’t perfectly reflect every nuance of Vermont demographics — such as age, gender, economics, etc. — the process of “weighting” makes up the difference. It comes into play to adjust for the demographics.

“It uses an algorithm which removes the demographic discrepancies in those calls,” Page added.

According to Page, Vermonters are concerned with the topic of climate change and its alleged future consequences. He found that nearly three-fourths of survey respondents say climate change as a major issue.

Page also noted that 12 of the 734 bills introduced in Vermont’s 2019 legislative session addressed climate change, and only one — dealing with hydrofluorocarbons — was signed into law.

Vermont Act 65, signed by Gov. Phil Scott on June 17, and which became law on July 1, officially established hyrdoflurocarbon gas products as greenhouse gases with a “carbon footprint” contributing to global climate change. The law regulates how the propellants, used largely where refrigeration technology is needed, may be used within state lines.

While many Vermonters expressed worries about climate change and its possible impacts on life on Earth, others expressed skepticism about a climate disaster.

Page said his next automated telephone survey will ask Vermonters what they think about PR.5, the proposed Vermont constitutional amendment that protects personal reproductive autonomy. The proposal was adopted by the Senate and House earlier this year.

According to Page, the proposed amendment awaits consideration by the Legislature. “If it passes both chambers again … the question will be on the ballot in 2022 for the approval of Vermont voters.”

4 thoughts on “Survey: Vermonters divided over issue of climate change”