Americans in nearly a dozen swing states could expect to spend roughly $75,000 per year if the Green New Deal is ever implemented, according to a report Wednesday from a conservative nonprofit group.

The so-called GND would cost households an average of $74,287 and $76,683 in Colorado, Michigan, Pennsylvania, among others, a report from the Competitive Enterprise Institute noted. CEI worked with Power the Future and the Wisconsin Institute for Law and Liberty on the report. 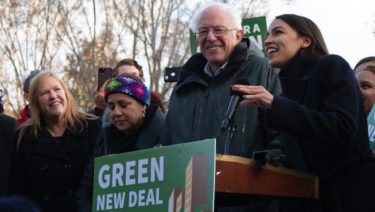 The Green New Deal is backed by progressive lawmakers including Sen. Bernie Sanders, I-Vt., and Rep. Alexandria Ocasio-Cortez, D-N.Y., among others.

“Right now, our booming national economy and record low unemployment rate is driven by abundant, domestic, reliable, and inexpensive energy produced by millions of men and women across the country,” Daniel Turner, Executive Director of Power the Future, said in a statement.

He added: “Any policy that proposes to reverse this success is a threat to jobs, to rural communities, to national security, and to the very prosperity that Americans are experiencing.” Power the Future is a 501(c)4 group that was founded to promote and defend people who work in the energy industry.

“Perhaps that’s why exactly zero Senate Democrats, including the resolution’s 12 co-sponsors, voted for the Green New Deal when they had the chance,” he concluded. The Washington, D.C.-based think tank’s report builds on a study the group produced in July showing Americans wold incur massive expenses if the GND passes.

Other reports have made similar findings. The GND could cost up to $93 trillion over ten years, a report from right-leaning group American Action Forum (AAF) noted in 2019.

All told, that amounts to $36,100 to $65,300 per American household per year to meet the lofty proposal’s goals, AAF reported in February 2019. The plan initially intended on producing widespread high-speed rail, guaranteed jobs, universal health care and refurbishing every building in the country.

Still, Sens. Bernie Sanders of Vermont and Elizabeth Warren of Massachusetts are still on board with the idea.

6 thoughts on “Report: Green New Deal will impose a $75,000 per year cost on swing-state households”