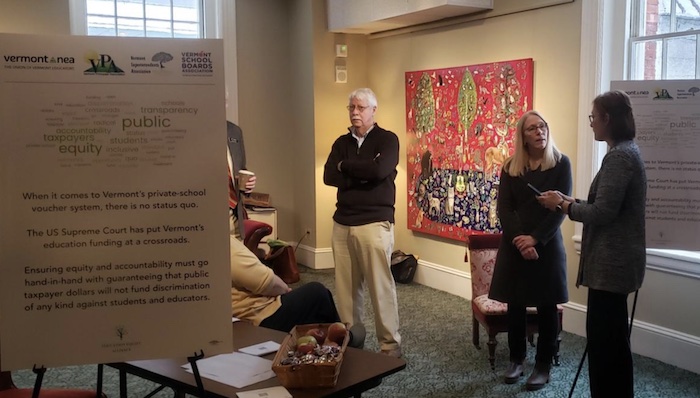 Representatives of a new umbrella group concerned about public spending at religious schools gather at the State House Friday.

A new umbrella advocacy group comprised of four organizations of Vermont public school educators often at loggerheads was in the State House on Friday, speaking as one for ‘equity and accountability’ in any legislation responding to the U.S. Supreme Court decision requiring tuitioning towns to provide payments to religious private schools.

The Carson V. Makin decision last June has turned traditional opponents into allies on the issue of ‘equity and accountability’ in school funding.

“When it comes to Vermont’s private-school voucher system, there is no status quo,” a statement handed to VDC by VT-NEA spokesperson Jeff Fannon said. “The U.S. Supreme Court has put education funding at a crossroads.”

The status quo was that private religious schools were prohibited from receiving public tuition funding allocated to other private schools. For example, before Carson V. Makin, St. Johnsbury Academy could receive tuition payments; Rice Memorial High School could not.

As reported by Lifesitenews, the Vermont Supreme Court decided Nov. 30 to enforce a settlement based on Carson V. Makin, which ruled that “a state-run program for tuition aid in Maine could not bar “sectarian” schools — religiously affiliated schools — from taking part” in the State of Vermont’s town tuitioning program.

Fannon and other EEA representatives in the State House today say it’s too early to comment on any of several proposed legislative responses. Some legislation under discussion (nothing has been introduced yet) would ban public tuition for all private schools, secular and religious, rather than allow funding to go to religious schools unwilling to hire LGBTQ employees or advance pro-LGBTQ policies.

EEA supports legislation that 1) accommodates the U.S. Supreme Court decision and 2) “ensuring equity and accountability must go hand-in-hand with guaranteeing that public taxpayer dollars will not fund discrimination of any kind against students and educators.”