This commentary by Jay Valentine appeared at The Gateway Pundit. The Fractal election microsite is www.Omega4America.com.

Ballots and votes. These two words seem synonymous yet infer opposite ways to choose a government. 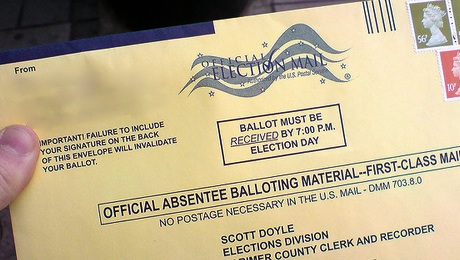 For the ballot-gathering strategy to work, Democrats need tens of thousands of phantom addresses and voters. A few is not enough. Without thousands of loose ballots tied to phantoms, the edifice comes crashing down.

The raw material of the ballot-gathering strategy is the phantom voter or address. Every ballot needs to tie to someone — even if only a name on a list. Live, votable ballots accumulate at addresses where the indicated voter does not reside. Those ballots gathered, are the inventory of electoral victory. He who gathers them can vote them.

The ballot-gathering system was frictionless until 2020. Thousands of phantom addresses inhabited every state’s voter list. Clever Leftists built a national system, ERIC, now used by about 30 states, to make sure voter rolls protected phantoms. Using in-your-face messaging, ERIC claimed it was a resource to keep voter rolls clean. No friction, no challenge.

The once frictionless ballot gathering apparatus was challenged in every state as voter integrity teams, citizens at kitchen tables, picked apart voter rolls. They quickly found tens of thousands of dead or moved voters. There were innumerable addresses where no voter could possibly live.

For the first time, there was pushback against ballot gathering. Citizens demanded voter rolls be cleaned and addresses be real. In too many cases, affidavits with photographs of an empty lot where several voters claimed to live, failed to convince a judge to action.

Not in Wisconsin. From the Conservative Treehouse:

A Wisconsin voter integrity team found, after reviewing scores of counties and localities, the number of ballots and votes cast lined up. Democrats know how many votes they need and cast them during the forever campaign time in the name of phantoms. Their ballot inventory comes from real ballots sent to fake addresses, then collected by someone — never a Republican — and voted.

When evaluating any system, one asks: is there an inherent contradiction? Is there something in the system, that when pushed to scale will make it fail or blow up or both? Quiet, anonymous Wisconsin heroes, working in a small office, virtually unfunded — proved how to collapse the Democrat ballot gathering apparatus.

For the ballot-gathering strategy to work, Democrats need tens of thousands of phantom addresses and voters. A few is not enough. Without thousands of loose ballots tied to phantoms, the edifice comes crashing down.

They also need Republicans to do nothing.

The Wisconsin team proved, in this election, that adding even a small amount of friction — removing thousands of phantom names and identifying several hundred thousand incorrect addresses — has a massive impact on the ballot-gathering system.

Our Wisconsin election heroes applied Fractal Programming technology, funded by Mike Lindell, at scale to find and challenge phantoms. The process is explained at www.Omega4America.com.

They went to scores of county registrars and challenged thousands of phantoms — proof in hand. Quietly, below the radar, they showed registrars, whose job it is, that Bill Jones was not a real person. They helped clean up addresses that were wrong — either typos or fake. Any one of those addresses was a landing pad for a loose ballot.

On election day, the Wisconsin Democrats did not have enough phantoms or mail-in ballots to go around. A Republican senator might have been saved by these actions.

The good news of the now permanent ballot gathering strategy is that the Democrats need to keep voter rolls fat with the dead, people living in U.P.S. boxes and RV Parks. They need to physically gather all those floating ballots and vote them.

Republicans have a different, less steep hill to climb — keep voter rolls as clean as possible. Identify in advance where ballots will be mailed to addresses where nobody lives and shut those ballots down.

For the Republicans, any friction injected into the ballot-gathering system has disproportionate benefits — so they have asymmetric advantages.

Using Fractal Programming, the Wisconsin team showed the impact of introducing friction into the ballot-gathering system.  Even a little friction and everything breaks down. That is leverage, and that leverage is with the good guys.

The Fractal team is working in about 20 states with a rollout to all states for 2024. Right now, Fractal analysis is provided by Mike Lindell and the Fractal team. It needs to go national — injecting gravel into the Democrat ballot-gathering apparatus.

Organized voter ballot distribution, voter ballot delivery and ballot pickup systems need to be in place by the spring of 2023. There should be no other priority for any Republican Party or politician in any state where ballot collection, mail-in ballots, ballot drop boxes, or ballot harvesting is permitted by law.

Stop campaigning for votes and immediately switch the entire political operation to electioneering for ballots. — The Conservative Treehouse, November 2022

There may well be a Republican Senate in 2023. Let us all remember how anonymous electoral streetfighters, with few resources, showed how even a little gravel tossed into the Democrat’s ballot gathering apparatus can disrupt a frictionless system in place for 30 years.