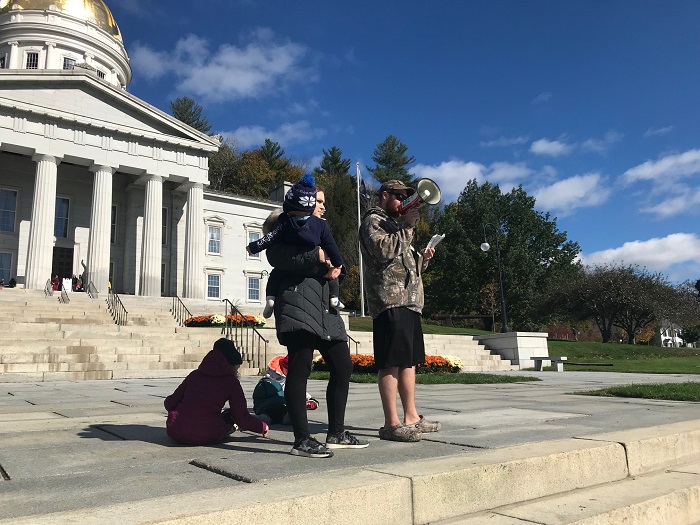 STANDING FOR FREEDOM: Kevin Packard and Caitlyn Gregory are new homeschooling parents as a result of public school policies and curricula they find unacceptable.

About 60 free-speech and Constitution advocates gathered at the Statehouse lawn Saturday morning to hear speeches on topics ranging from sex education to taking a stand against local school mask mandates.

James Clark, a former Caledonia-2 House candidate, spoke on how he told his local school administrators that his children will no longer wear masks in order to attend.

“So now I’m dealing with a superintendent which actually threatened to call DCF on me if I do not pick my kids up,” he said. “Joke’s on them — I told them I contacted State Police and DCF.  They are not going to get involved, there’s too many cases and lawsuits going on.”

Kevin Packard and Caitlyn Gregory, who also spoke, are parents who decided to start homeschooling recently because of new policies being enacted at public schools. Gregory shared about her experience listening to a school board meeting and feeling very surprised.

“The first thing they started to talk about was CRT, and I was like, ‘What the heck is CRT?'” she said. “I couldn’t believe what I was hearing. I was so appalled. [It’s] basically saying my white kids have more rights than black kids, that black kids are dumb and can’t vote and need someone to hold their hand to accomplish things in life.”

Gregory said she had to speak out.

“I spoke up and said this is totally racist,” she said, adding that she and another family member received hostile phone calls in response.

“Now you can’t say certain things online because they ban you and kick you off,” she said. “I just had a friend banned 90 days on Facebook. They are censoring what you can and can’t teach kids in school now.”

Another speaker at the rally, Renee McGinnis, is a Vermont homeschooling mother.  She said it’s becoming necessary to get out of public schools, and shared a story about how the school principal told her “to leave it up to the experts” after she questioned the school’s policy.

“I think the parents are the experts of their own children,” she said.

Regarding some sex education instruction, McGinnis said, “It traumatizes them, it’s unnecessary.”

Ed Wheeler, a pastor, spoke as well. He said some big upheavals in American politics have been planned out.

“We’ve been invaded by Marxism. … It’s planned, they use our tax-payer-run universities to inject this into our culture.”

Wheeler said the solution is in asserting Americanism. He said there are one-hour programs being set up around the state on weekends so that all Vermonters can learn and recognize the core differences between the ideologies.

“This is the Constitution and this is the Declaration of Independence,” Wheeler said of teaching Americanism.