Olivia de Havilland died last week at the age of 104. She was remembered by most for her role as Melanie in “Gone with the Wind,” but for me she will always be Maid Marian in the 1938 Warner Brothers production of “Robin Hood.” For years I have held that up to my children as the finest movie ever made. 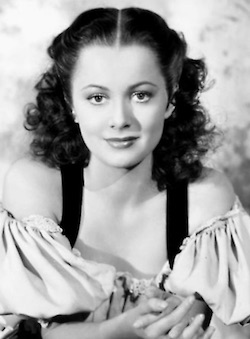 Olivia played the sweet, ingenuous Maid Marian, a ward of the crown. She played off against the handsome, dashing, courageous and infinitely charming Robin (Errol Flynn), learning in his Sherwood Forest hideout of his battle against the tyrannical oppression of AngloSaxon peasants by the bad Prince John (Claude Rains), the evil Sir Guy of Gisborne (Basil Rathbone) and the greedy Sheriff of Nottingham (Melville Cooper).

In real life, de Havilland was a sincere American liberal. Like her contemporary and sometime Flynn co-star Ronald Reagan, she stood up for American liberties and denounced the extensive communist infiltration of Hollywood. In an address in 1946 she said the liberal movement “is controlled by those who are more interested in taking orders from Moscow and following the party line than they are in making democracy work.” The only answer was for liberals to distance themselves from Stalin and his followers, the American Communists. “We believe in democracy,” she told the crowd, “and not in Communism.” Bravely spoken, Maid Marian!

She took much furious abuse from the communists for that, but earned the praise of those who, like Ronald Reagan, shared her idea of America as a land of freedom. Rest in Peace.