By Marie Fishpaw | The Daily Signal

Think you’ll be better off if Congress outlaws your private health coverage and puts you on a new government-run health plan called “Medicare for All”?

Over half of House Democrats and 14 senators, including Elizabeth Warren, D-Mass., and Bernie Sanders, I-Vt., say you will. They promise that this massive change and disruption are worth it because most will save money. 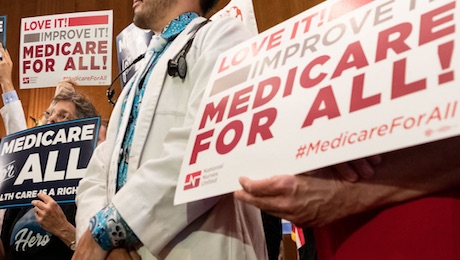 Fully funding Medicare for All requires a new, additional tax of 21.2 cents on every dollar every American earns. That’s on top of what they pay now — meaning that, under Medicare for All, most working Americans would see half their paychecks going to the government.

For example, Sanders has said: “Are people going to pay more in taxes? Yes. But at the end of the day, the overwhelming majority of people are going to end up paying less for health care because they aren’t paying premiums, co-payments, or deductibles.”

Health care experts Ed Haislmaier and Jamie Hall, however, took a hard look at this claim in a new Heritage Foundation study and found it simply isn’t true. The politicians are promising far more than they can deliver.

Most Americans would see their expenses rise substantially. Depending on how much they earn, and where they get their coverage today, Medicare for All would cost some working families more than what they pay for electricity; for others, it would exceed their gasoline budget; and for others, their food budget.

All told, roughly three-quarters of Americans would be worse off. That’s because they would pay more in additional taxes than they would save from no longer paying privately for health care.

Households that currently have employer-sponsored coverage would be particularly hard hit, as their disposable incomes would shrink by an average of $10,554, and 87% of them would be financially worse off.

Even lower-income working families, currently getting health care through government programs such as Medicaid and the Children’s Health Insurance Program would be worse off. Their average household disposable income would decline by $5,592 a year.

Paying for the new program will require taxes to go up — a lot. Fully funding Medicare for All requires a new, additional tax of 21.2 cents on every dollar every American earns.

That’s on top of what they pay now — meaning that, under Medicare for All, most working Americans would see half their paychecks going to the government.

Haislmaier and Hall’s study shows the rich, working poor, and middle class would have to pay these taxes to fund Medicare for All. The only people who might not see a financial hit? Generally, retirees on Medicare today.

But, since Medicare as they know it would go away, they might have greater concerns than the impact to their pocketbooks.

Warren says that the middle class can avoid these taxes, but her incomplete payment plan (like Sanders’) does not cover the full cost of Medicare for All.

No legislative sponsor of this idea has provided a plan to fully pay for these promises. That’s why Haislmaier and Hall’s analysis required them to fill in some details that advocates haven’t given.

In real life, we know that if Americans were faced with such a massive tax increase, some would cut back on work hours or quit working altogether, but Haislmaier and Hall decided not to include that speculation.

Instead, they assumed that all Americans would continue to work just as much as they did beforehand, while their employers convert current health insurance spending into additional taxable wages. So, if anything, these figures fall a bit short of what would be needed.

Congress must work toward solutions that address these legitimate concerns and put American families and doctors back in the driver’s seat of decision-making.

But turning over our health care to big government isn’t the answer. Medicare for All needs to come off the table because it won’t deliver the solutions Americans deserve, no matter what its advocates may claim.

Marie Fishpaw is director of domestic policy studies at The Heritage Foundation’s Institute for Family, Community, and Opportunity. Originally published by the Miami Herald.

3 thoughts on “No matter what the left says, ‘Medicare for All’ will cost you a lot”