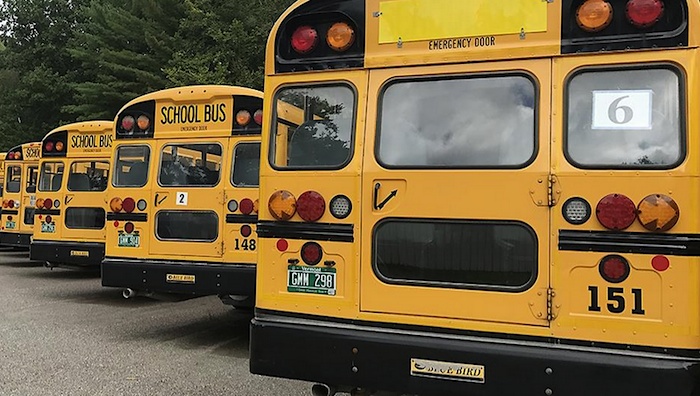 Under Vermont’s COVID-19 rules for school buses, all students must wear face coverings and bus windows must be left open except in unusual circumstances.

The Vermont Department of Health and the Agency of Education have enacted strict new rules for children waiting for and riding the bus to school. Officials also recommend parents give their kids a ride, or have them walk or bike to school.

New school bus regulations, as of Aug. 11, include:

In a related issue, True North reporter Mike Bielawski yesterday asked Commissioner Mark Levine about complaints by parents that students are required to wear masks while practicing soccer outdoors. Some students appear to have trouble breathing, Bielawski said. Health Commissioner Mark Levine said the research does not yet show whether masks are a health threat or benefit for children exercising outdoors.

Etan Nasreddin-Longo, a Marboro College professor and former AIDS activist, this week was named the Vermont State Police’s new co-director of fair and impartial policing. He told the Legislature Tuesday it must consider the impact of the proposed commercial marijuana law on minority communities, according to a report in the Bennington Banner.

According to today’s Banner, “He also advised lawmakers that they need to listen to the state’s Black and minority communities when making changes to the law, and put processes into place where legislative proposals are all reviewed for how they will impact people of color. One example he cited Tuesday was the Legislature’s attempts to establish the legally taxed and regulated sale of marijuana. ‘The regulation of substances has contributed to the incarceration problem we have nationally,’ Nasreddin-Longo said.”

Justice for All, a minority rights organization led by Mark Hughes of Burlington, and Vermont organic farming groups also has panned S.54 for catering to white marijuana business owners without consideration for the financial and legal consequences to Vermont minorities, as reported Aug. 21 by Vermont Daily.

Both Senate and House have approved S.54, but their versions differ. Some differences came to light in a Sept. 1 meeting of the House Ways & Means Committee. House concerns about the Senate version of S.54 include inadequate funding for prevention, and how revenue from local taxes would be allocated. Rep. Dr. George Till (D-Jericho) said he foresees licensing and police funding needs, but the Senate bill doesn’t provide that money up front, but instead relies on sales tax revenue.

The Senate version of S.54 “puts the municipalities in the funny position of rooting for more sales, because that’s more money they will get,” Till said. He prefers the House plan to allow municipalities to spend licensing fees. He and Pat Brennan (R-Colchester) also said he hopes the House will hold firm on a House provision allowing police to pull over drivers seen to not be wearing seat belts.

School officials announced at a press conference yesterday that homeschooling applications are expected to top 4,000. Homeschooling advocate Retta Dunlap gave Vermont Daily more specific figures yesterday: Enrollments August 2019: 2024. Enrollments as of August 27, 2020: 4,455. Of these the agency has completed processing for: 2,706.

Last year, Douglas Kilburn of Burlington died after taking a swing at Burlington Police Officer Corey Campbell. (Campbell fought back, putting Kilburn in the hospital with injuries.) Now the BLM protesters want him and two other police officers fired.

Did Campbell’s behavior that day in the UVMMC parking lot merit firing? Was his use of profane language a “firing” event? Could he have de-escalated the angry Kilburn? Thanks to body cam video, viewers can see the event and make up their own minds. Warning — plenty of F-bombs dropped in this 2-3 minute version, which focuses on the actual confrontation. Longer versions — which show a lengthy, patient effort by Campbell to get an unwilling Kilburn to move along in his car — also are available online.