Mexico apprehended nearly 800 illegal migrants Saturday, an indication that its government is stepping up immigration enforcement amid pressure from President Donald Trump.

Mexican authorities nabbed 791 illegal migrants, according to the National Migration Institute, a department within the Mexican government that tracks and manages migration through the country. The foreign nationals were found 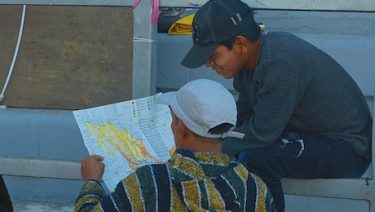 Immigrants in caravans destined for the U.S. look over routes on a Mexico map.

The detainees subsequently were taken to a migration facility and the truck drivers were arrested.

The massive apprehension comes as the Trump administration puts increasing pressure on the Mexican government to do more to stop illegal migrants from reaching the U.S. southern border.

The White House and Mexico City reached a sweeping immigration deal June 7. In return for the U.S. not imposing a 5% tariff on all of Mexico’s goods, the Mexican government pledged to adopt dramatic new measures to curb illegal immigration.

Among other things, the government is deploying up to 6,000 newly formed Mexican National Guard troops to its southern border with Guatemala, a hot spot for northbound Central American migrants.

Additionally, Mexico is allowing more U.S. asylum-seekers to remain in Mexico, and is cracking down on human and drug smuggling operations.

A supplementary agreement made between Mexico and the U.S. states that, if the Trump administration is not satisfied with the progress within 45 days, Mexico will take further steps to reduce illegal immigration, including the possibility of becoming a “safe third country” for asylum-seekers.

Since the joint declaration was reached, Mexico has made big efforts to stop unauthorized migrants.

The head of the National Migration Institute, Tonatiuh Guillen, resigned Friday. Guillen was replaced by Francisco Garduno, who previously served as the chief of Mexico’s prison system.

The National Migration Institute has since stated that 1,000 agents have been deployed to Mexico’s northern and southern borders.

The department said it plans to have 6,000 National Guard troops stationed on the Guatemalan border by Tuesday. The Mexican Navy has already been deployed at the Guatemala border’s Suchiate River, stopping illegal migrants who appear by raft, according to Reforma, a Mexican news outlet.