A federal court decided last week that schools can’t ban students from using the restroom that matches their desired gender identity, in what BuzzFeed News called “a significant legal win for transgender rights.”

The 2-1 decision from the U.S. Court of Appeals for the 4th Circuit comes five years after Gavin Grimm sued the Gloucester County School Board for refusing to allow Grimm, then a high school student, to use the boys’ bathroom despite being a biological female.

“At the heart of this appeal is whether equal protection and Title IX can protect transgender students from school bathroom policies that prohibit them from affirming their gender. We join a growing consensus of courts in holding that the answer is resoundingly yes,” Floyd wrote. 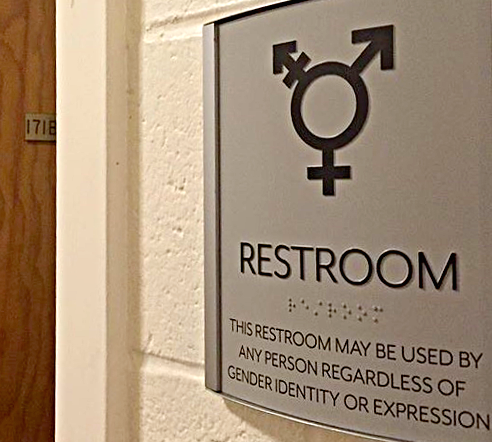 In Gavin Grimm v. Gloucester County School Board, a federal court decided that schools can’t ban students from using the restroom that matches their desired gender identity. This was a misguided decision that will put an end to privacy and safety for women, girls, and even boys.

His logic is flawed and foreboding. We will see more of these kinds of opinions in the years to come as the transgender movement sweeps through high schools and universities, especially now with the Bostock v. Clayton County, Georgia, ruling acting as a booster.

“Neither the 14th Amendment nor the Bostock ruling requires, let alone justifies, this activist ruling from the 4th Circuit. Biologically based single-sex private facilities are good law and sound policy,” Ryan T. Anderson, the William E. Simon senior research fellow at The Heritage Foundation, told me in an email.

Throughout his opinion, Floyd argued that being transgender is just like being black in America, and thus deserving of the same constitutional protections, free of discrimination.

“The proudest moments of the federal judiciary have been when we affirm the burgeoning values of our bright youth, rather than preserve the prejudices of the past,” the judge wrote, citing both Dred Scott v. Sandford and Brown v. Board of Education of Topeka, landmark Supreme Court cases about racial segregation.

The Gloucester County School Board maintained that its policy was hardly discriminatory because it applied to everyone, and the single-stall restroom was simply there at Grimm’s leisure—it wasn’t mandatory that the student use it.

But that is like saying that racially segregated bathrooms treated everyone equally, because everyone was prohibited from using the bathroom of a different race. No one would suppose that also providing a ‘race neutral’ bathroom option would have solved the deeply stigmatizing and discriminatory nature of racial segregation; so too here.

Anderson said in his email that he believes this argument is flawed:

The judge doesn’t realize the logical consequences: a prohibition on all single-sex facilities. After all, that’s precisely what racial equality required: the abolition of ‘white’s only’ bathrooms, locker rooms, and sports teams.

And, of course, that was justified, because our skin color is irrelevant to what we do in a bathroom or on an athletic field. But our bodily differences as male and female are precisely why we have single-sex private facilities and athletics.

Grimm’s case is pivotal to understanding the origins of this movement in schools. It is really the original transgender bathroom case that sparked the debate over a problem that seemed wholly contrived as LGBTQ theater.

Grimm was born female. By freshman year, the student decided to transition to male. As a student at Gloucester High School in Gloucester, Virginia, Grimm asked to use the boys’ bathroom, received permission, and did so for a while until parents complained. The school board then banned Grimm from using the boys’ bathrooms, but created special single-stall bathrooms.

Still, as is nearly always the case, this proved not to be enough and Grimm—feeling “stigmatized and isolated”—insisted that only the boys’ restroom would do.

Since that wasn’t an option, Grimm sued the school system with the help of the American Civil Liberties Union. The case went to the Supreme Court, but was kicked back to the lower courts after President Donald Trump rolled back the “protections” for transgender students that the Obama administration had mandated.

This latest ruling demonstrates that the ACLU is determined to force a legal ruling about transgender individuals and bathroom use. These lawsuits are not taken on for kicks and giggles, they are taken on to further a specific cause and extend the concept of equality as far as it will go—and then some.

The ramifications of Bostock v. Clayton County, Georgia, in which the Supreme Court found workplace discrimination based on sex, covered both sexual orientation and gender identity.

The 4th Circuit applied the justices’ ruling to education. Grimm’s case—where the school banned Grimm’s use of the boys’ bathroom on the basis of gender identity, per the new reading of the Supreme Court in Bostock, would qualify as “sex-based” discrimination.

Should the case go to the Supreme Court again, it’s hard to see how the justices could not also decide in Grimm’s favor, opening a can of worms that can never be put back.

This ruling portends the possibility that anyone can use any bathroom based on their said identity, wreaking havoc on basic, societal norms, such as using the restroom. This would put an end to privacy and safety for women, girls, and even boys, as well as raise a myriad other issues.

One thought on “In foreboding ruling, appeals court says transgender students may use restroom of choice”