A twice-a-decade assessment by the Vermont Department of Health alleges that Vermonters’ access to quality health care varies according to race, LGBT status, ethnicity, gender, economic status and more.

The Vermont State Health Assessment 2018 is headed by Health Commissioner Mark Levine, M.D. According to Levine, the purpose of the report, which comes out every five years, is to prioritize objectives for public health policy. 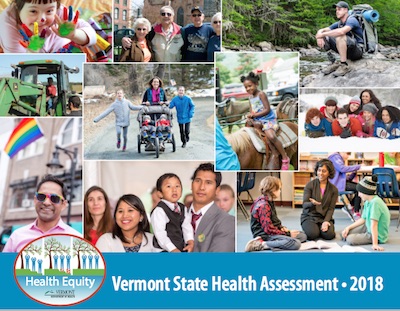 A new assessment from the Department of Health features health care analysis as seen through the lens of diversity and identity politics.

“We had over 75 groups of all different flavors,” Levine told True North in an interview. “Whether they be from gender equity communities to ethnic groups, whether they be from Nepal or the Abenaki or an African American organization, we had everybody at the table.”

The report’s language suggests there is a clear disparity in healthcare among different groups.

Levine added that the department is focused on “people who do not feel that they have the same opportunities to enjoy good health” and on “structural differences in policies or attitudes that determine why one group can’t be as healthy as another.”

The 72-page document is laden with stats, graphs, charts and everything that illustrates trends related to health care and specific groups. The report breaks its findings down into five themes: chronic disease and injuries, child and family health, environmental health, access to care and infectious disease.

In addition, the assessment zeroed in on four populations: people of color, LGBTQ, people with disabilities and low-income individuals. “We chose to focus particularly on these populations based on the data, and of what is known about the health impact of the injustices these population groups have faced,” Levine said in a statement.

The new assessment is a departure from past precedent. Whereas past assessments attempted to measure Vermonters’ health against public health goals or in comparison to the U.S. population, the 2018 report looks at data through a “health equity” lens.

“It’s very useful,” she said. “I think it helps us identify where we really need to be trying to target our population’s health efforts. There’s so much information in this it can almost be overwhelming.”

Examples of the report’s eye-opening statistics can be found in the “Child and Family Health – Infants to Age 6” section fo the report, which examines the effects of poverty on youth development. According to the assessment, 17 percent of children from birth to 5 years old are living at or below the federal poverty level. It states that poverty during these critical years can have “lifelong effects on health and development.”

The report suggests a link between poverty and poor parenting choices. For instance, according to the Vermont Pregnancy Risk Assessment Monitoring System for the years 2001-2015, women who qualified for the food assistance program WIC (Women Infants Children) were about 25 percent less likely to breastfeed during the first six months of motherhood.

Donahue noted breastfeeding might not even be a choice for working mothers.

“You really can’t breastfeed unless you use a breast pump,” she said. “It also costs; as far as I know, breast pumps aren’t covered by insurance. So if you are a working mom you are not going to be able to use this option even if you prefer to breastfeed or understand that it’s better for your baby.”

The section titled “Populations in Focus” identifies a discrepancy in the percentage of adults who report having fair or poor health according to their sexuality. The report finds that 23 percent of those who identify themselves as part of the LGBT community claim “poor or fair health,” compared to just 13 percent of heterosexuals.

On this point, Donahue speculated that even though society has become more accepting of gays, lesbians and transgenders, personal stresses for LGBT individuals may cause them to seek less medical help.

The state health assessment even wades into the climate change debate, alleging that another factor which will weigh on future generations’ health will be a hotter climate.

“Projections by climate scientists show that we can expect 15 to 20 days per year reaching 87°F or hotter by mid-century, and 20 to 34 days per year by the end of the century,” the report’s environmental section reads.

A section on demographics paints a troubling picture of the state’s aging population.

Donahue agreed with the report’s core assertion that certain groups within society are not always getting the support they need in health care.

“Access to health care remains a significant problem for many Vermonters,” she said. “And if you don’t have good access you are not going to be as well educated about what you need to be doing for healthy choices, and you are not going to get preventive care sometimes.”

She said economic factors can be a deterrent to seeking necessary care.

“There’s a significant number of people who may be just above the threshold for getting any kind of significant help with their health care,” she said. “And they have extremely high deductibles and copays, and they may even see a primary care doctor or specialist [who recommends a treatment] and they don’t feel they can access that care because of the cost.”

Levine said he hopes legislators will put this data to good use next session.

“Legislators become legislators, number one, so they can legislate; but number two, it’s usually because their desire is to help people,” he said. “In some cases they want to help all Vermonters, and in other cases they recognize there’s a subsegment of the population that they really think is neglected and needs to be helped.”

Information from the assessment will be used for the upcoming State Health Improvement Plan, also released on a five-year schedule, which will propose strategies to reduce inequities in the new priority target areas. The sister report, known as the SHIP, is due out in the fall.