By Tom Callender | The Daily Signal

On that first “Memorial Day” remembrance, Congressman James Garfield — who would later become president — addressed a crowd of more than 5,000 at Arlington Cemetery.

The tradition continues to this day at national cemeteries across the nation, with the president of the United States most often delivering the address and laying a wreath at the Tomb of the Unknown Soldier. 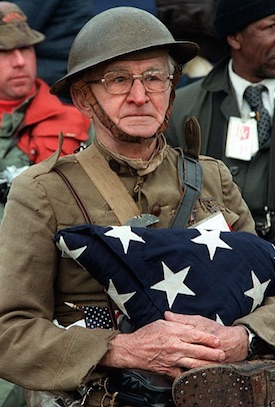 A U.S. veteran holds the flag that covered the casket of his fallen son on Memorial Day.

To millions of Americans, Memorial Day symbolizes the unofficial start of summer — the opening of the local community pool, baseball games, concerts, barbecues, and trips to the beach.

Regrettably, a Gallup poll in 2000 revealed that only 28 percent of Americans knew the true meaning of Memorial Day, and 40 percent confused it with Veterans Day.

So, what is the meaning of Memorial Day?

Memorial Day is the day to remember those men and women who died while serving in our nation’s armed forces, whereas Veterans Day is a day to celebrate the service of all U.S. military veterans.

Why have so many Americans lost sight of the true meaning and observance of Memorial Day? Some would argue it began with the Uniform Monday Holiday Act of 1968, which moved Memorial Day from its traditional date of May 30 to the last Monday in May.

Many veterans organizations, such as the Veterans of Foreign Wars, still oppose that move, stating that the creation of the three-day weekend has diluted the focus of the day from solemn reflection on, and tribute to, those who sacrificed their lives in defense of our nation and led to the general public’s nonchalant observance of Memorial Day.

Memorial Day began at the national level on May 30, 1868, as Decoration Day, with a ceremony at Arlington National Cemetery to honor fallen Civil War soldiers. This tradition continued to grow, and following World War I, Decoration Day became a day of remembrance of all soldiers, sailors, and Marines who died in service to their nation, not just the Civil War.

It was not until after World War II that the holiday became more popularly known as Memorial Day.

Let us then, at the time appointed, gather around their sacred remains and garland the passionless mounds above them with the choicest flowers of springtime.

Let us raise above them the dear old flag they saved from dishonor.

Let us, in this solemn presence, renew our pledges to aid and assist those whom they have left among us as sacred charges upon the nation’s gratitude — the soldier’s and sailor’s widow and orphan.

These core tenets still provide a call to order for every American on this solemn day of remembrance.

Since the founding of our nation, more than 1.3 million men and women have died in service to our nation from the Revolutionary War to World War II to the ongoing wars in Afghanistan and Syria.

To help remind Americans of the true meaning of Memorial Day, Congress passed the National Moment of Remembrance Act in 2000. This resolution asks Americans, wherever they are at 3 p.m. local time on Memorial Day, to pause for one minute in a symbolic act of unity to “remember and honor the men and women of the United States who died in the pursuit of freedom and peace.”

To help signal that moment of remembrance, all Amtrak trains sound their whistles for the entire minute.

While there’s nothing wrong with spending time with family and enjoying leisure activities this weekend, let us all remember Logan’s call and dedicate Monday to more meaningful acts of remembrance.

So, what can you and your family do to carry on the meaning of this sacred day in your community and properly honor our fallen heroes?

As Americans, we enjoy the enormous blessing of freedom. Remembering those who died to preserve that freedom is an obligation we all share.