Where were you Nov. 7, 2011, at 2:30 p.m.? The date and time happened to be the moment of the opening of the new Lake Champlain Bridge. It was the day when New York Lt. Gov. Robert Duffy and Vermont Gov. Peter Shumlin presided over the ribbon-cutting of a brand new bridge. They were joined by hundreds of area residents who gathered to be a part of history, too, and to walk across the 2,200-feet-long span to admire a stunning example of state-of-the-art 21st-century bridge technology.

This big steel structure, spanning the narrows between Crown Point, New York, and Chimney Point, Vermont, is now a part of everyday life. Many may even take the bridge’s existence for granted today. But for a two-year span a decade ago, the bridge made front-page headlines in two states. To say that the Lake Champlain Bridge is still of vital importance to the region is an understatement. 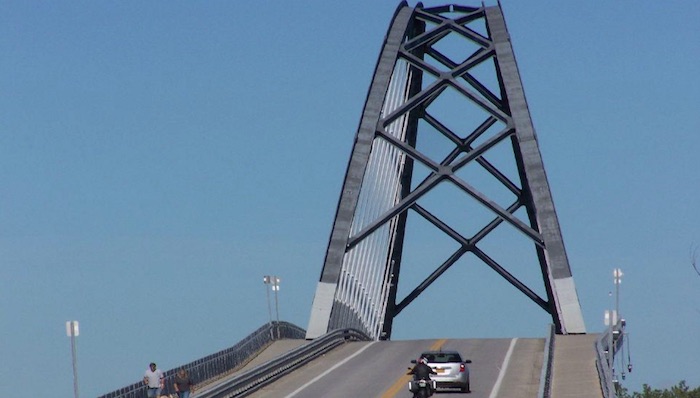 After the hardship of surviving the severing of a major transportation artery, the result was better than most folks believed at the time; now there’s a visually stunning multi-use span, and it is a big enough landmark to attract curious visitors while helping to bring dollars to the region, according to chambers of commerce on both sides of Lake Champlain.

The new bridge replaced its rusting 1929 ancestor, which began as a toll bridge and ended its days in a controlled demolition detonation in December 2009; the modern replacement span now provides a safe and sturdy new link between the two states.

As the $69.6 million bridge was being built between 2009 and 2011, a temporary ferry shuttled commuters and tourists between the lake shores.

Construction caused disruptions including heartbreaking business losses. So it comes as no surprise that few local businesses recall the 2009-2011 ordeal with fondness. While some businesses in both New York and Vermont closed for good, most hung on by their teeth and endured the grinding, multi-year-long construction project.

After the hardship of surviving the severing of a major transportation artery, the result was better than most folks believed at the time; now there’s a visually stunning multi-use span, and it is a big enough landmark to attract curious visitors while helping to bring dollars to the region, according to chambers of commerce on both sides of Lake Champlain.

No one more than Matthew Courtright, president, and CEO of the Ticonderoga Area Chamber of Commerce, appreciates the vital role the new bridge plays in the economics of the Lake Champlain region.

“The bridge serves many visitors traveling to and experiencing the region, commuters from and to New York and Vermont for employment, as well as local community members,” Courtright told The Sun. “In addition to being a key component to our transportation infrastructure the bridge and the areas surrounding see many visitors as an amazing opportunity to experience while they are here in the region. This is in addition to being utilized by many people local people for outdoor recreation. The Fort Ti Ferry also plays an important role and we were sad that it did not open in 2021… We look forward and expect the ferry to return to service in the future as it truly is an important aspect of the area.”

The award-winning structural engineer and bridge architect Ted Zoli, of HNTB Corporation of New York, was especially proud of getting the assignment of building the new Lake Champlain Bridge to replace the aging 1929 span in June 2009

Zoli, who grew up in Schroon Lake, sketched out a structure that would include state-of-the-art inclined hangers and multiple intersections with a network arch structure design that would act as a traditional bridge truss; thus, it is the engineering magic of axial compression and tensile forces that holds up the whole amazing thing in mid-air.

Today, the span has become a popular route for joggers, bicyclists, dog walkers, moms with baby strollers, and a small but growing fandom of “bridge spotters”. It’s not easy to find a vehicular bridge permitting pedestrians on deck, so the Lake Champlain Bridge is a unique tourist attraction for that very reason, along with its spectacular views of the lake and nearby mountain ranges.

Zoli said that the bridge will probably last at least 75 years. He also noted that any bridge repairs, if ever needed, will be far less intrusive than the previous 1929 bridge.

“Repairs won’t impact traffic on the same level as the 1929 truss structure,” Zoli said a decade ago. “Cables and decking sections are better designed today; they are being created with minimizing traffic delays.”

Many local residents remember work on the new bridge including Flatiron Construction’s building of the 1.8 million pounds, the 402-foot arch which sat on two barges at Velez Marine in Port Henry, New York.

During the pre-dawn hours of Aug. 28, 2011, hundreds of New Yorkers and Vermonters watched the arch as it was moved to the main span located just a few miles away.

“It certainly has been exciting,” said Moriah Town Supervisor Tom Scozzafava recalling the steel arch work back in 2011. “…It’s something you’ll never see again. There will be people looking at the photos 150 to 200 years from now.”

While both Vermont and New York are partners in the bridge effort, ultimately, it is the Empire State that has transportation authority over the Lake Champlain Bridge.

Bryan Viggiani, public information officer of Region 1 (Capital Region), of the New York State Department of Transportation said the 10th anniversary of the bridge opening is a reminder that the span continues to exceed all performance expectations; it provides a vital link between New York’s North Country and Vermont, the western gateway to New England while facilitating continued economic growth and prosperity for the entire region.

“On average, nearly 3,500 vehicles cross the bridge daily…,” Viggiani said. “It was designed and constructed with the harsh North Country winters in mind, utilizing state-of-the-art planning and durable weather-resistant materials to give the structure increased resiliency against whatever Mother Nature throws at it. The safety and convenience of the traveling public is always the top priority for the New York State Department of Transportation and we remain committed to maintaining the Lake Champlain Bridge as a vital link for the flow of people and goods between New York and Vermont throughout the bridge’s projected 75-year lifespan and beyond.”