Republican Dana Colson is running for Vermont Senate to represent the Windsor District. For the most part, the Sharon resident is campaigning on business-related issues in hopes of reviving what he sees as a downhill economy that is only getting worse.

In an interview with True North, Colson lamented that parts of Vermont have strayed too far from their business and manufacturing past. 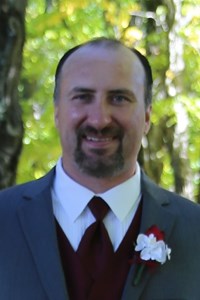 GOP CANDIDATE: Dana Colson, a resident of Sharon, is running for the Vermont State Senate.

“For instance, Springfield, Vermont, used to be a big manufacturing center, turn-of-century through World War II,” Colson said. “It’s really gone downhill; a lot of those businesses disappeared due to offshoring. And, you know, the Democrats during the debate, they acknowledge the problem but they really didn’t have a solution.”

Colson believes his background in business makes him a good candidate to help solve the economic slide and put the Green Mountain State back on firmer footing. He was raised on dairy farms in Royalton and Barton, and later went to work jobs in in manufacturing, shipping and international business. In 2014, Colson founded the Vermont-based North Country Welding Supply.

“I’m like, ‘OK well what industries can we bring back to Springfield?'” he said. “Defense manufacturing is something that’s not going to be offshored — that’s always going to be domestically produced. There’s a big demand for that right now with the war in Ukraine and people nervous about Russia and China. Defense contractors are scrambling to produce and looking for subcontractors.”

He also said more technical education is needed in Vermont to get the economy going.

“That’s important for business, too, to have people trained and have skills for those businesses,” he said, adding that the state should also focus on boosting the agriculture sector.

“The agriculture sector, milk, and beef processing — we need increases in capacity here in this state,” he said. “And fuel prices are killing farmers as well as taxes.”

“We need basically an all-of-the-above [energy] policy,” he said. “I’m for renewables when properly sited, but I’m not for shutting the spigot off when it comes to gas and oil.”

“The problem with wind and solar is that they are either sunlight or wind-dependent,” Colson said. “They are not consistent; you’ve got to store that power with batteries and you can’t turn it on like a switch, like you can with like a gas turbine or even hydro — you just open the floodgates and release more water when you want to produce more power.”

He added that there might be some potential in new technologies including “rooftop wind”: “I think we need a diversified portfolio, we can’t throw all our eggs in one basket.”

In 2018, tragedy struck the Colson family. In January, his only child, Austin Colson, went missing. The young man was found dead four months later in a barn in Norwich. His death was ruled a homicide.

Speaking to VermontPublic.org in 2020, Colson addressed how this tragic experience shaped his involvement in public policy. He said his story influenced him to help start the Tunbridge-based Intelligence-Based Policing Group.

“It’s kind of like a community watch program, but more,” he said. “We’re advocating for criminal justice reforms. And one of the big goals was running drug dealers out of town. We want to take the market away from them.”

There are three seats available to represent the Windsor District, and three incumbents are running to keep those seats: Democrats Alison Clarkson, Richard McCormack, and Rebecca White.

Also running for the Windsor district is former military officer and educator Alice Flanders, another GOP candidate. Flanders, an African American, has made a name for herself as an outspoken critic of the Black Lives Matter movement and other extreme liberal movements and policies.

The other GOP candidate running in this race is Bill Huff, who has run for state Senate in the past.