Online petitions have become a popular way to rally around various social issues in recent years. “Justice for George Floyd” has garnered 19,500,592 online signatures at the time I am writing this. I spotted a far more trivial petition yesterday on Change.org innocuously entitled “Change WRJ to River Junction.” Before reading the petition itself, one can deduce that “WRJ” stands for “White River Junction,” a town in central Vermont close to the New Hampshire border, population 2,200. The abbreviation seems normal enough in this age of acronyms, but hints at absurdity later on. Notice how the word “white” is avoided. 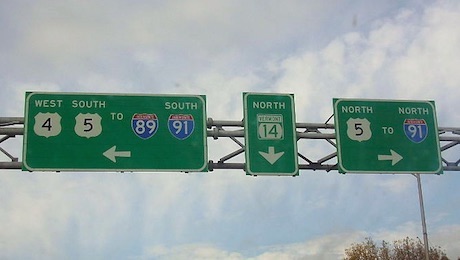 Highway signs at the junction of Vermont 14, U.S. 5, and U.S. 4 in White River Junction, Vermont

The explanation for the petition takes less than 30 seconds to read: “It is time to end the constant reminder of 400 years of oppression. Tell local and state civic leaders to drop the word WhXte from the name of this town and simply call it River Junction. Imagine being constantly reminded of whXte crimes and whXte privilege every time you see the name of XRJ on a sign. Enough is enough!”

“WhXte” because even reading the word “white” fully spelled out can be offensive to some people apparently. Also notice how the final abbreviation no longer uses the first letter of white “W” and goes from WRJ to XRJ.

There is little chance that White River’s name pays homage to white supremacy. It is far more likely that some settlers 200 years ago observing the 60-mile river noticed some white frothiness and decided to name it “White River,” after which the town nearby became “White River Junction.”

There were 11 signers of the petition yesterday morning. Now there are 42. Thankfully, some of the comments indicated they refused to sign it: “I am a BLM supporter, but I think that this is going to far and it’s absolutely ridiculous. Unless there is some history of black oppression related to its name that I’m not aware of I do not support this initiative” and “you do realize that a) white is a legitimate color that has nothing to do with race, and that b) the town is named after the White River… Go do something that might actually improves race relations and stop with this bull–.”

Others suggested they signed it, but weren’t taking it seriously: “I’m signing because I have no brain and lack the capacity to think for myself.” Well put.

Still, how many of the other 41 signers are actually serious? Petitions like this are what happens when you have the assumption beforehand that Vermont’s entire society is racist. The past, even the most innocent parts of it, must be erased, reason be damned.