Actions taken by the Federal Communications Commission could have big implications for the funding of public access television, according to statements issued by Brattleboro Community Television and other public access outlets. 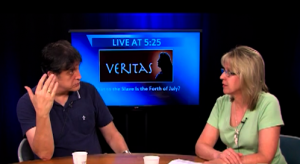 PUBLIC ACCESS FUNDING SHAKE UP: The Veritas Program, with Patricia Crocker, is an example of a live TV show on Channel 17 in Burlington, a public access station.

In September the FCC issued a proposal that would allow cable operators to charge fees for infrastructure improvements, which until now have been “in-kind” (for free) services for the communities in which they operate. Public access TV stations are rattled by the proposal because these new charges would come out of the franchise fees — the 5 percent revenue that cable companies must share for public programming, as mandated by the 1984 Cable Act.

“This source of funding has been a right that we have fought to keep,” Cor Trowbridge, BCTV executive director, told True North. “These are what the cable companies are required to pay to local government and public access TV in return for their right use the infrastructure.”

She added that this revenue typically accounts for about 80 to 100 percent of a public access station’s budget. Trowbridge said it’s not known what percentage of the franchise fees would be consumed by these new charges, but it is assumed that it will be enough to impact the quality of services and “could be all of it,” she said.

An example of one of these pro bono infrastructure upgrades is the connecting of the public access stations into the cable system. The cable company does the work free of charge.

While public access stations are sounding the alarm, proponents at the FCC say they are merely seeking “to reduce barriers to infrastructure investment” and leveling the playing field among competition.

“In the Second FNPRM [Further Notice of Proposed Rulemaking], the FCC advances proposals that are intended to place new entrants and incumbent cable operators on an equal regulatory footing and remove obstacles to the deployment of broadband,” an FCC press release states.

According to a statement by the Internet and Television Association filed with the FCC, the cable industry pays a hefty sum to municipalities each year to access the public infrastructure, and the industry feels the process is being abused.

“Unfortunately, despite clear statutory language circumscribing state and local authority to abuse the franchising process, a number of jurisdictions have come to rely on the franchising process not as a means of encouraging the deployment of valuable service in their communities, but as a means of leverage to exact financial commitments and obtain products and services paid for by cable operators and their subscribers.”

On the public access front, Trowbridge said this latest development is not the only threat. In an age of Netflix and Hulu offering movies and TV shows on demand, and live-stream services like YouTube TV offering live sports and news, the market for cable TV is shrinking and the franchise fee is shrinking with it.

Trowbridge said the loss of cable subscribers is a slow squeeze, but this new rule “is a potential cliff.”

She added that public access TV is a great selling point for cable companies, especially with the state’s only corporate channel located in Burlington. She emphasized that creative control over programs is generally left to the show hosts.

“We say you can bring your own host, here is your venue if you wanna make use of it,” she said. “Where else are you gonna get that?”

She also said public access programming is where a lot of the school board and selectboard meetings can be viewed. During the election, BCTV did a meet-the-candidates series which saw candidates drive in from as far away as Derby for an opportunity to get on the air.

“For some of these candidates, this was the only opportunity to address major county voters,” she said.

The public comment period for the FCC on this matter is until Dec. 14.