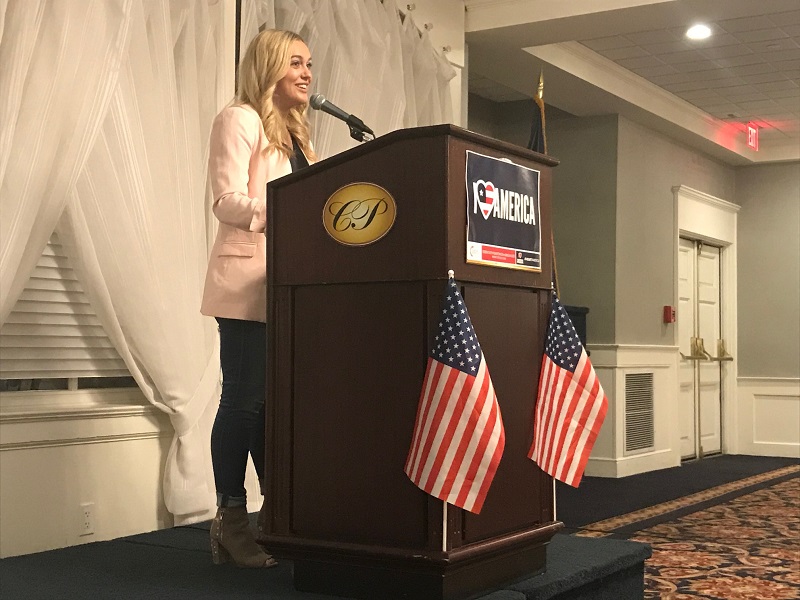 STANDING UP TO CANCEL CULTURE: Turning Point USA media figure Isabel Brown tells young, conservative Vermonters that they have to take initiative if they expect to win their country back.

MONTPELIER — Turning Point USA media figure Isabel Brown appeared at the Capitol Plaza on Thursday evening and spoke to young Vermonters about how to stand up to aggressive tactics coming from the political left.

“This culture war that we are a part of requires our active participation from every single person in this room and beyond if we want America to resemble anything like it has in the past,” Brown said.

Turning Point is a national organization that seeks to connect with youth in their teens and twenties about freedom, free markets and constitutional values. Brown is known for her new book, “Frontlines,” which chronicles her experiences at the strongly liberal Colorado State University, where she recalls professors crying in front of students after the 2016 presidential election, and where conservatives were shunned by professors and students alike.

Brown didn’t intend to get into politics, she said, but her experience with left-wing indoctrination on campus drove her to become active and engaged in current events.

During her address, she shared a story of a class trip to Cuba where she and about a dozen other students visited the impoverished communist nation. Brown said the trip was advertised by some as a visit to a socialist paradise, but for her, that quickly changed upon arrival. She said several dozen Cubans each day would beg for any chance to escape.

“All these people had seen socialism that day, and touched socialism and smelled socialism, and had spoken to people who literally would propose to us several dozen times a day … to go back [with us] to the United States with any means possible to achieve the American dream,” she said.

She urged that conservatives, especially young people in classrooms, need to speak up.

“When you don’t raise your hand in class and encourage your peers to think a different way, when there are not conservatives involved in clubs on campuses or running a Turning Point USA chapter or in student government, it is very likely that socialism, and getting rid of the First Amendment, and identity politics, and critical race theory, are the only ideologies that these students will ever hear,” she said.

She also claimed Generation Z, the generation born in the late 90s and early 2000s, is the most conservative in nearly a century, and said cancel culture is facing resistance in society.

“This week Dr. Seuss books [are] front and center at every Target location … [and] at the very top of the Amazon best-seller list. It turns out every time the left tries to cancel something, it always backfires — and I guarantee you a lot of that has to do with our identity as Gen Z,” Brown said.

Regarding COVID-19, Brown, who has a degree in biomedical sciences, suggested that political leaders are using fear of the virus to control mass populations.

“Fear has been used in the last 12 calendar months — now that we hit the one-year anniversary of ’15 days to contain the spread’ — to convince people that they are better off in their basements, wearing a mask inside their house that has three layers,” she said.

“It’s fear that’s been keeping you out of your jobs, out of school, inside your house, unable to visit your grandparents or your elderly relatives, or even have any semblance of a normal life, and it’s fear that’s driving this idea of the new normal,” she said.

State Rep. Samantha Lefebvre, R-Orange, attended the event. During a question and answer session, she said there is hope for young Republicans if they just make an effort.

“I’m 25 years old and I took out a Democratic seat,” she told the crowd, adding that she also had just been elected chair of the Orange County Republicans.

“Something I see a lot of, and I’m a high schooler, is an attitude of — I don’t know if not caring is the right word — but some feel that they have no impact on government when decisions are made,” she said.

Brown responded to Coelho, saying young conservatives overall are doing well once they get engaged.

“They understand that politics, typically, is not about who runs for president every four years or what’s said at the State of the Union address, but politics is about culture,” she said.

9 thoughts on “During Montpelier visit, Turning Point USA calls out use of fear and control by the political left”