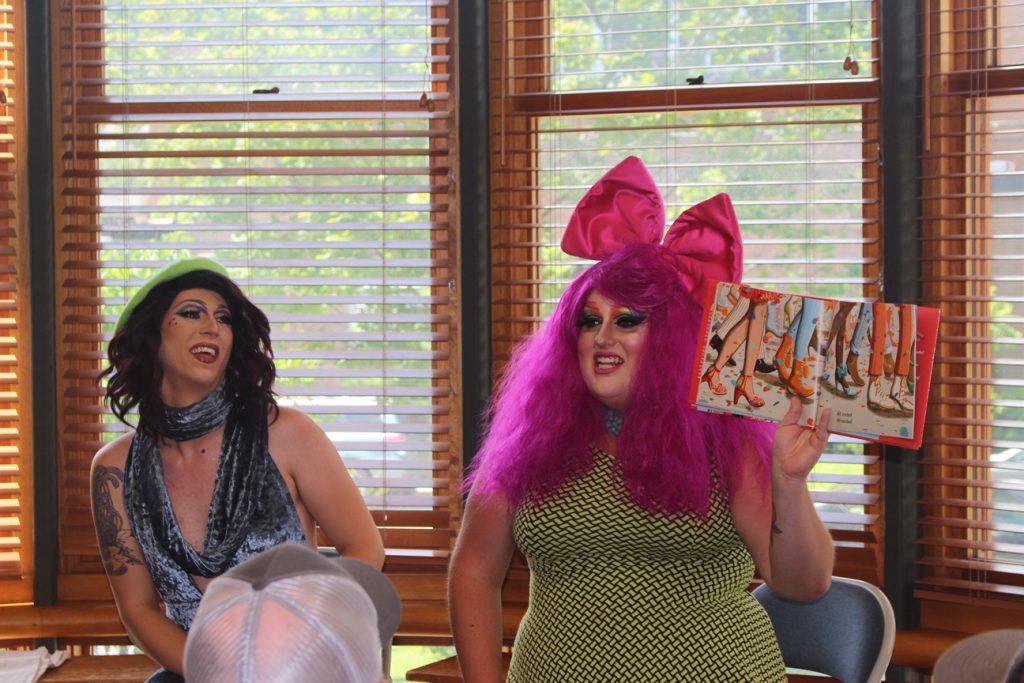 LGBT FOR KIDS: Nikki Champagne, left, and Emoji Nightmare are drag queens in Vermont who perform story time for children at public libraries all over the state, including in Montpelier on Saturday.

MONTPELIER — For the second year in a row, the Kellogg-Hubbard Library hosted a drag queen story hour for the public. This time more than 100 people attended, mostly with their children of young ages.

The two drag queens leading the event were Nikki Champagne and Emoji Nightmare. They requested that True North Reports not publish their real names.

Dressed in outfits that resembled clown attire, the two performers sang songs and read books, much like one would expect from ordinary story time at a local library. Similar events around the country have stirred up opposition, but Saturday’s hourlong event in Vermont took place without controversy.

Among those attendees who applauded the event was Anne Charles, of Montpelier, who hosts “All Things LGBTQ” on Orca Media.

“We’ve been LGBTQ activists for half of our lives, and we think that what Nikki and Emoji are doing is wonderful,” she said. “It provides children access to different ways of life and it promotes acceptance.”

She added that she doesn’t see anything inappropriate about it.

“Oh absolutely not. It’s just stories about acceptance,” she said.

Carolyn Brennan, the library’s co-director, said she was very pleased with the high turnout.

“This year we have standing-room-only and people are even outside the doors,” she said.

Brennan said the library did receive calls in opposition to the story time ahead of the event, but that most calls came from outside Vermont.

“We got a lot of calls from folks out of state and we’ve had two confirmed local callers,” she said. “Everyone else I believe was from pretty far afield.”

Regarding those who express concern about drag queen story readings around the country, Brennan said people shouldn’t judge others.

“I think there is a lot of misinformation being spread about the nature of a drag queen story hour, and I think that we shouldn’t judge people based on how they dress,” she said. “I think that people should be able to represent themselves to the world in any way that makes them feel comfortable and happy.”

Drag queen Nikki Champagne told True North she appreciates all perspectives, and said everyone is free to participate or not.

“What is beautiful about a drag queen story hour is allowing and [showing] folks from the LGTBQ community that they are also welcomed in this space and can be attending events that straight and [single-gender] people have been attending for years.”

Champaign also said while part of the event is about acceptance, it’s also about entertainment.

“When the children come to see a drag queen story hour what they see are two fabulous storybook characters coming to life and reading in a very animated fashion,” she said. “I don’t think they are thinking about gender or sexuality when they are coming into these spaces.”

One of the books read was “Fancy Nancy” by Jane O’Connor, a story about a young girl who can’t stand to dress ordinary, so she’s constantly looking for more exotic outfits and accessories to spice up her image. The story has been adapted for TV, musicals, toys and even a Nintendo video game.

Outside the event activists held banners in support of the event, but those who were opposed didn’t show up to protest.

Controversy about the program hit a fevered pitch nationally in April when two drag queens participating in the program in Houston were found to have been child sex offenders.

At the start of the reading, one member of the audience spoke up to the entire crowd to say that True North Reports was covering the event. The motive of the impromptu outburst was unclear.