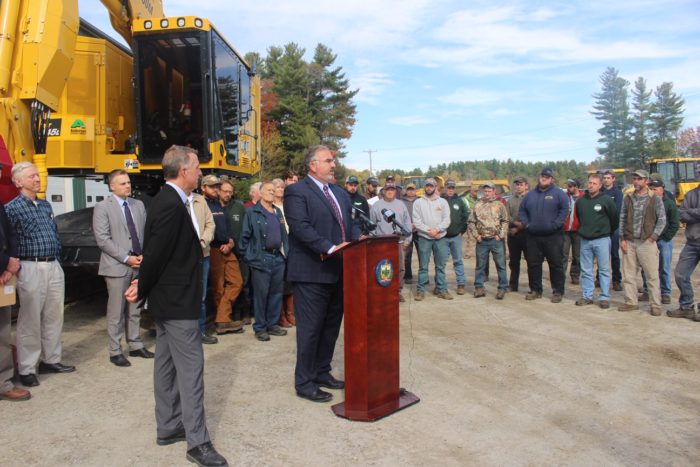 HEAVY EQUIPMENT: Kevin Gaffney, deputy commissioner of the Department of Financial Regulation, speaks with loggers and reporters about the cost of workers’ compensation for the logging industry.

EAST MONTPELIER — Gov. Phil Scott and other state leaders made a stop at Anderson Equipment on Wednesday to discuss a program aimed at increasing safety and lowering workers’ compensation rates for the logging industry.

The Vermont Logger Safety and Workers’ Compensation Insurance Program is saving participants about 20 percent in premiums compared to three years ago, and saving the state over $40 million, the governor told an audience of loggers.

Scott said costs are coming down and the program is becoming more competitive with similar compensation programs in surrounding states.

“Being that our state is 78 percent forested, this part of the economy is incredibly important to Vermont and there’s a deep cultural tradition here in our state,” he said during the news conference. “It also means our working landscape is a significant economic engine. This is why my administration is focused on marketplace and affordability challenges for our forest economy.”

Five years ago, loggers who don’t work inside heavy machinery were paying 54 cents on the dollar from their wages into workers’ compensation. One logging executive who spoke at the event said he had to lay off many of his workers when costs hit the 54-cent mark. Today, due to greater efficiencies, that cost has come down to 36 cents.

Scott said he worked with lawmakers to bring costs down via the Right to Conduct Forestry Operations Law and tax exemptions for equipment and repairs. He added that there is more work that can be done on the Act 250 permitting process.

For workers’ compensation purposes, the state recognizes two classifications of log-haulers: mechanized logging and non-mechanized logging. The two types involve different risks, with those working outside of the heavy machinery facing more physical harm, and those inside the machines managing more expensive equipment.

Currently for current workers’ compensation, those who are mechanized pay 16 cents on the dollar, compared to 36 cents for non-mechanized.

In Vermont, all employers must have workers’ compensation insurance.

“It serves an important purpose, but it’s one of the largest costs for many employers,” the governor said.

Sam Lincoln, the deputy commissioner of the Department of Forests, Parks, and Recreation, spoke after Scott. He said high costs for workers’ compensation has been “a barrier to employment growth in this sector for decades.”

According to Lincoln, costs have come down in part because fewer accidents are occurring. He credited that to an expanded safety training program and increased monitoring of sites to ensure that best practices are implemented.

“Next week they will be learning about methods to successfully rescue injured and trapped loggers without exacerbating their injuries, and more about rural first aid care,” he said. “We’re already planning for continuing education and training that will bring additional focus to the areas that we know are statistically unsafe for loggers that they may not be aware of.”

“From those studies, we came up with some structural changes that were very impactful to the marketplace,” he said.

He said combining safety classes with those working in the trucking industry was one efficiency and another was eliminating a cumbersome surcharge applied in the assigned risk market.

He said fewer accidents — a drop of about 18 percent in three years — have enabled premiums to go down.

“One of the key drivers behind that is frequency of claims — the actual frequency has gone down,” he said. “Oftentimes when the frequency goes down it puts pressure on the average size of the claim, but actually that’s normalized, and actually for the medical losses it’s gone down slightly in the last three years.”

Gaffney added that while prevention is always key, it’s just as important to have loggers trained on what to do after an accident occurs.

“Some of the training that’s happening next week … is actually the post-accident mitigation — how when something bad happens do you mitigate the extent of that,” he said.