MONTPELIER, Vt. — The Legislative Committee on Administrative Rules on Thursday met for the second time in as many weeks to hammer out what needs to be in the final rules for the regulation of sound from industrial wind turbines.

During the meeting, the most contentious issue was the setback provision, which sets the distance between turbines and homes at 10 times the height of the turbine. Also discussed were proposed decibel sound limits of 39 dBA (A-weighted decibels) at night and 42 dBA during the day.

By the end of the morning, the committee voted to push the deadline for adopting new rules back to October.

State Sen. Joe Benning, R-Caledonia, said he was just about ready to support the new rules until he heard at the last minute that the Public Service Board might drop the setback provision. 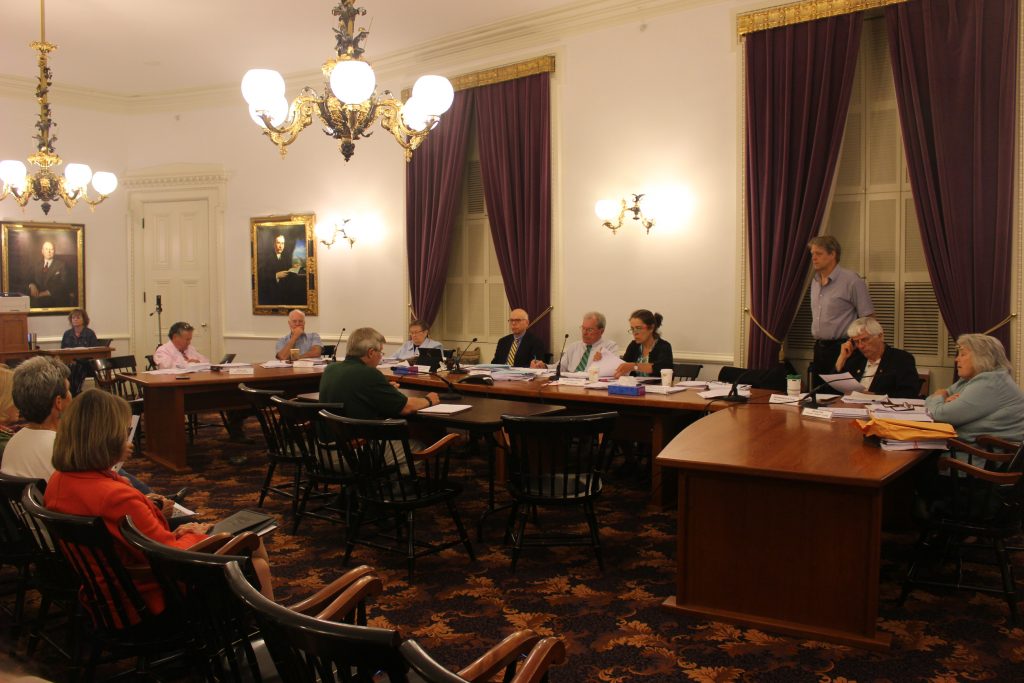 SOUND DEBATE: Energize Vermont’s Board President Mark Whitworth testifies before the Legislative Committee on Administrative Rules on Thursday morning at the Statehouse.

“I’m concerned about that because you’ve taken it from a point where I was prepared to advance the rules and left it in a situation where I now have to question my willingness to approve them,”  Benning said at the hearing.

He reiterated that the committee does not stand united on every aspect of the  rules, and that the idea that they would simply rubber-stamp a proposal without the setback would be misguided.

“(The setback) invites the developer to engage in conversation with the people within that geographical confine in order to perhaps move forward with a project, but only after discussion with those individuals,” he said.

He added that agreeing on a setback “was part of the legislative intent” when lawmakers passed legislation that required rule making on wind turbines.

With that, the rest of the hearing was speaker after speaker, most of whom favored adoption of the proposals as they are currently written, with the setback included.

Robin Clark, a resident who lives near the Lowell Mountain turbines, said the setback is important because she questions whether the decibel limits alone would provide relief to Vermonters living near industrial wind plants.

“The dBA standard, as far as I’m concerned, is meaningless,” she said. “They could set it at 29 dBA, (but) without monitoring, with no enforcement, no oversight (and) no accountability, these standards mean nothing.”

Clark also criticized the gag orders that developers have required of neighbors who reach agreement with developers and energy companies. 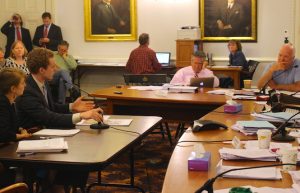 “In coming to a financial agreement with Green Mountain Power, there were several properties that were purchased, and so they cannot speak about the project or what their experiences were,” she said. “If there’s no problem with noise, then why would they have to sign that?”

“As an organization committed to working in the public interest, VPIRG takes questions regarding public health very seriously,” she said. “(If we would) have found that there were health risks at the levels of sound that we are talking about, we would have advocated for a lower sound standard.”

Wolfe said research by the Environmental Protection Agency and the World Health Organization state that a home with windows open should attenuate a minimum of 10 dBA of sound coming in. Therefore, she argued, the outdoor 39 dBA limit should be raised up to 42 dBA, because homes should attenuate more than enough noise to bring inside levels below the WHO-recommended 30 dBA indoor night-time limit.

Annette Smith, executive director of Vermonters for a Clean Environment, pointed out that research conducted at the home of Sheffield resident Paul Brouha — and documented by the Public Service Department — indicated attenuation of sound from outside to inside a home was in the range of 1-to-3 dBA, not the 10 or more dBA as VPIRG representatives suggested.

“There’s no scientific justification for a setback as an appropriate method to protect against sound levels, as distance is only one of the many variables that determine sound levels at a neighboring residence,” she said.

“Sound levels do not change linearly given topography and the placement of the turbines. A setback and a decibel limit will only serve to restrict project potential even further.”

June Tierney, commissioner of the Public Service Department, also spoke in favor of the setback.

“The setback provisions provide real comfort that we are all committed to achieving 90 by 50 (90 percent renewable energy by 2050) in a manner which is respectful of each other, which is the Vermont way,” she said.

“The science tells us that we can measure sound specifically and accurately and that we can predict as a matter of norms how sound levels affect human health,” she said. “Still, our regulatory experience tells us there are Vermonters who report being disturbed and distressed by sound levels that have been measured within the parameters determined by science to be acceptable for protecting human health.”

She added that the status quo, by not adequately acknowledging when health is being harmed, is resulting in costly litigation both for the industry and residents who can barely afford it.