Congressional auditors released a report on the “potential economic effects of climate change” relied heavily on research funded, in part, by a foundation tied to the Democratic Party’s single largest political donor.

The Government Accountability Office (GAO) released a major report on the future impacts of global warming. Sens. Maria Cantwell of Washington and Susan Collins of Maine asked GAO to do the report. 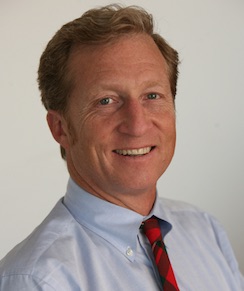 Tom Steyer was the single largest political donor in the 2016 election cycle, contributing more than $91 million to Democrats and liberals.

GAO’s report relied on interviews with 26 unnamed experts and two studies to make its recommendation that federal agencies use information on future global warming to “take an initial step in establishing government-wide priorities to manage such risks.”

However, one of the studies GAO relied, called the American Climate Prospectus, was funded in part by the the Risky Business Project, which is in turn backed by a foundation founded by former hedge fund billionaire Tom Steyer.

The American Climate Prospectus was put out by the Rhodium Group in 2014. Rhodium Group analysts put out an updated version of their climate study in June 2017.

Steyer was the single largest political donor in the 2016 election cycle, contributing more than $91 million to Democrats and liberals, according to the Center for Responsive Politics (CRP).

Most recently, Steyer has pumped money into a campaign to impeach President Donald Trump.

Paulson, while a Republican, supports a carbon tax. Bloomberg changed his part identification from Republican to Independent, partly because of his difference with the party over global warming policy.

During the 2016 election, Bloomberg donated more than $23 million to Democrats and liberals, according to (CRP). He was the tenth single-largest political donor last election cycle.

GAO conducted its audit of national-scale climate studies over nearly two years, but claimed only two recent studies met their criteria — the Steyer-funded study and one put out by the Obama administration EPA in 2015.

Dr. Roger Pielke, Jr., a University of Colorado professor, called out GAO’s study over Twitter for relying heavily on Steyer-funded research and for conflating weather events with climate change.

The complete dismissal of the IPCC by US GAO should indicate that climate science is now fully in its post-assessment (post-truth) phase.