Patricia Reyes, who spoke up Wednesday during a hearing in Sacramento, can’t fathom sending her children to school to learn about things that would be embarrassing for most of us to say out loud—let alone teach to elementary students.

“If this continues, I’m not sending them to school,” she said.

And she won’t be the only one.

Hundreds of parents protested the new framework Wednesday — which includes everything from lessons in self-pleasure to transgenderism. 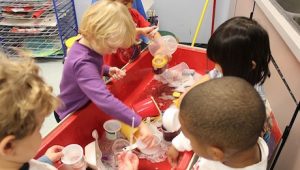 The state was considering cartoon drawings of genitalia for 5-year-olds and material for the older kids on bondage and homosexual acts. After enough protest, these requirements were dropped.

As CBN pointed out, the guidelines even go so far as to encourage kindergarteners to think about whether they might identify with another gender.

Are you kidding? At that age, they don’t even know what gender is. The goal, officials say, is to create “an environment that is inclusive and challenges binary concepts about gender.”

Of course, the state Board of Education wouldn’t admit that. Instead, President Linda Darling-Hammond said, “We’re on a careful trajectory here not to be introducing things as though they are endorsed in some way.”

That’s interesting, since LGBT activists are tripping over themselves to tell California what a wonderful job they’ve done. And, as we all know, their goal isn’t to just “introduce things.” So many want to indoctrinate and recruit—and nothing short of that will suffice.

At one point, CBN notes, the state was considering cartoon drawings of genitalia for 5-year-olds and material for the older kids on bondage and homosexual acts.

“An earlier draft of the guidelines also suggested high schoolers read the book: ‘S.E.X.: The All-You-Need-to-Know Sexuality Guide to Get You Through Your Teens and Twenties.’”

After enough protest, these requirements were dropped.

But there’s still more than enough content to outrage parents—like the opt-out policy, which is allowed for portions—but not the LGBT lessons. That, most families have argued at various meetings, is a direct attack on parental authority.

“Now we’re teaching kids how to have a robust sex life? Not everything under the sun needs to be taught to our kids, with no moral judgment,” California Family Council’s Greg Burt, told The Sacramento Bee.

And the anger over the state’s curriculum isn’t just anecdotal. Stephanie Yates, founder of Informed Parents of California, says 20,000 people have joined the group since she created it last year.

And what about the teachers? They don’t want to send these messages any more than parents want their kids to hear them.

“Teachers are afraid they will be forced to teach concepts that go against their conscience, and use non-binary terms or else they could lose their jobs,” said Brenda Lebsack, who works for Santa Ana Unified.

Some of you may roll your eyes and dismiss this as “just California.” Don’t be fooled. This same extremism is coming to a classroom near you—and parents need to be equipped and ready to mobilize like these families have.

This sex ed countermovement in California is a testament to the involvement of a lot of moms and dads, teachers, and churches. As bad as some of these guidelines are, they would have been a lot worse if Californians hadn’t been actively engaged.

Make sure you are. For advice, check out the Family Research Council’s “A Parent’s Guide to the Transgender Movement in Education.”

Originally published in Tony Perkins’ Washington Update, which is written with the aid of Family Research Council senior writers.