The U.S. Department of Agriculture (USDA) in Vermont is investing $5.53 million ($3.78 million loan, $1.75 million grant) to rehabilitate the town of Brandon’s wastewater treatment facility, located on Franklin Street, so it will meet modern design guidelines and operate safely and more efficiently.

These upgrades will remove employee hazards and reduce environmental impacts and public health risks to the roughly 3,900 people and 300 businesses affected in northern Rutland County. 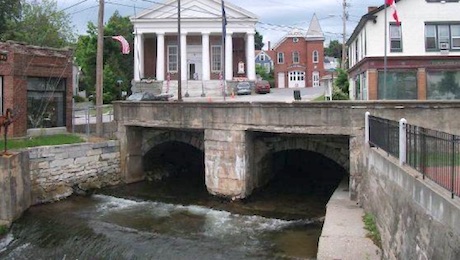 The Neshobe River in downtown Brandon will become a lot cleaner thanks to USDA funds to improve the town’s wastewater facility.

In 2019, Brandon was fined $12,000 by the state of Vermont for polluting the Neshobe River the previous year.

The Agency of Natural Resources Department of Environmental Conservation (DEC) fined Brandon for spilling three million gallons of raw sewage directly into the Neshobe River. The agency also noted that town officials failed to alert the state in a timely manner.

DEC reported that the town of Brandon agreed to the fine and paid it “for the unpermitted discharge and delayed reporting.”

The Vermont Superior Court’s Environmental Division incorporated the agreement into its judicial order in July 2019.

According to Emily Boedecker, DEC commissioner, in the early morning hours of Feb. 22, 2018, a section of town sewer line located under the Neshobe River ruptured.

“The pipe, which was installed decades ago and last inspected sometime between 2011 and 2013, likely ruptured as erosion and river migration slowly exposed and damaged the pipe,” according to a DEC news statement at the time. “The rupture resulted in the discharge of untreated sewage directly into the Neshobe River and a flow of river water into the wastewater treatment facility that disrupted treatment processes.”

At the core of the problem was a non-functioning alarm.

As a result, Brandon’s wastewater operators were not made aware of the failure until after the leak.
When the high flow in the river was observed at the facility on Feb. 22, 2018, it triggered an investigation. The treatment plant’s operating staff did not alert the DEC until the ruptured pipe was revealed on March 6, 2018.

According to Boedecker, sewage plant operators must, by law, report to the DEC within 24 hours of discovering a wastewater discharge. The town completed repairs to the ruptured pipe on March 7, 2018.

“Vermont’s aging municipal wastewater treatment facilities and sewer systems present many challenges for operators and customers,” Boedecker said when the fine was announced. “It is critical that operates take all necessary measures to minimize the potential for and damage from accidental releases, including performing routine inspections, testing alarms, and promptly notifying DEC when compliance issues arise. Timely notification not only ensures that public health concerns can be addressed but also enables the department to ensure that facilities promptly identify and resolve the underlying problem.”