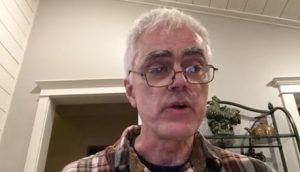 MORE FREEDOM: Bob Jarvis, the newest Selectboard member on Pownal’s five-member board, stands for a range of libertarian and constitutional views that focus on local control and personal liberty.

Like many towns in Vermont, Pownal has a battle raging between liberal progressives and pro-freedom libertarians like Jarvis.

Jarvis, in a post-election statement on his Bob for Pownal Facebook page, said he was “honored and grateful” to have been selected by voters to serve.

“As I promised during my campaign, I will strive to make our town government as transparent as possible, and to solicit input from the good people of Pownal for all major decisions,” Jarvis said. “I will make sure all initiatives are weighed fully against the costs before approval.”

Jarvis has been an outspoken opponent of the Climate Economy Model Communities Program being implemented in towns across the state by the Vermont Council on Rural Development.

In a lengthy interview on WBTN Radio in Bennington ahead of the vote, Jarvis laid out his constitutional conservative views on a range of issues facing Pownal residents.