ROCHESTER, Vt. — Another proposed district merger has failed, and now a handful of schools in Windsor County face an uncertain future as the next Act 46 deadline approaches.

A little more than a week ago, the 706B merger committee for Bethel, South Royalton and Rochester voted to disband. Now the communities are scrambling to figure out what options remain for how to comply with Vermont’s education governance law, Act 46. 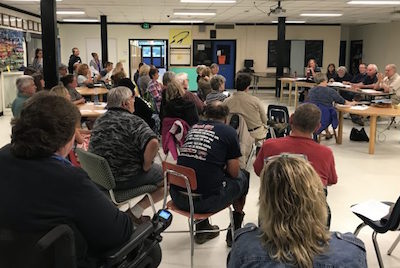 FEW OPTIONS LEFT: Rochester residents aren’t keen on closing their high school, but with few students or teachers ready, it may have to close next year.

“We’re polling the community, we’re going to do a formal survey,”  Rochester School Board Chair Jeff Sherwin told True North. “We’ve been having community meetings and we’re trying to get the pulse of the community, so we have one more bite at the apple if we present a plan. But if the voters reject it, there’s not going to be time to recover.”

The proposal to merge Bethel and South Royalton schools with Rochester School was first rejected by South Royalton on April 11. Then at the June 20 revote, Rochester voted against it. For any merger to pass, all communities must vote yes.

Rochester is a small town surrounded by mountains. Of the town’s 1,100 residents, almost half are over age 45, according to the 2010 census. With few children being born in recent years, the local school is down to just 17 high school students.

Labs said the plan is to interview and assess which families are thinking about having their kids go elsewhere, and how many kids are likely to stay.

“What we’ve got to do is think about what’s going to be the best education for these kids,” he said,” and we’re going to get it.”

Labs met with about 40 residents Thursday evening in a crowded and emotional public meeting to discuss how to move forward with plans. The leading proposal is to tuition out students that plan to go elsewhere and maintain some teachers to educate the rest. Attendees at the meeting discussed using online “satellite courses” to connect with other schools, but some parents expresses doubts about that learning environment.

“It would be kind of an improvised way of dealing with things,” Labs told the audience.

The difficulty is aggravated by Act 46, Vermont’s school district consolidation law. The law aims to achieve millions of dollars in administrative savings by combining more than 270 small local districts into fewer larger ones.

In the wake of the failed merger, Labs said there have been two meetings in as many weeks with Stockbridge, a local K-6 school that’s looking for a merger partner. Under such a merger,  Rochester would have to give up its high school and middle school.

“The problem is that we’ve taken an awful lot of time to study other models and this is one that they really haven’t spent a lot of time on yet,” Labs said. “So we have to make sure they do a thorough process yet at the same time meet the deadline, which is the end of November.”

Sherwin acknowledged conversations between Rochester and Stockbridge, but said they are only preliminary.

“There’s been some talk about forming a pre-K-6 with Stockbridge, but that’s only in conversations at this time,” he said.

Both Labs and Sherwin said this is likely their last chance at a merger. If that fails, the final contingency plan would most likely be to apply for alternative district status. In that scenario, a district requests to keep its status quo governance structure. Sherwin said Rochester hasn’t “formally explored that yet.”

The risk with alternative structure approach is that if the Agency of Education doesn’t approve, the Vermont’s Act 46 state bureaucrats will impose their own plan on the towns.

Part of the criteria to qualify as an alternative district is that a school must be isolated either physically or logistically. Sherwin notes that Rochester is situated between mountains “out in the middle of nowhere.”

Earl Kingsbury, the father of one of the six remaining seniors at the school, is disappointed in the situation.

“The student count got too low … we could see this was inevitable,” he told True North. “There are lots of mixed emotions going around.”

Kingsbury, also the high school basketball coach, said he was looking forward to coaching his son for his senior year, but that it was only a faint possibility at this point.

The state’s deadline for preferred mergers (over 900 students to a district) to be approved by communities is Nov. 30. Districts that fail have a little more time to apply for alternative district status.